Cath found this Santa lurking in the bush in Ashby – a mate for the one in Nunderi?

The sun is on its way down, and a baby magpie that has been harassing its parents for food for the last few days with constant squawking has finally hit the jackpot – one of the parents just presented it with a dead mouse! The child doesn’t quite know what to do, and has been bashing it on the ground for the last five minutes to try to break it up, I guess, as it sure can’t swallow a thing that size.

Now it’s flown off so I won’t know what happened next. The adult tried to help by pulling on the mouse, but junior thought it was trying to steal it, so ran away. Or maybe it wasn’t trying to help, but there was just an instinct to grab a possible meal, even from its own offspring. Who knows?

Now it’s gone, a shy pademelon is creeping out from the undergrowth to feed – oops, there goes a brush turkey. High traffic time on the property!

It’s been warm and wet, a bit earlier than usual for summer. So the ‘buzzies’ (paper wasps, mud wasps and others) have been very active – sometimes we have to close the back glass doors because a dozen or so are flying around looking for a good place to construct their nests.

The one below had made hers on a thin stalk under the table on the front deck – right where a person’s knee would connect with it. So reluctantly we had to remove it. After taking the photo, in which you can see the wasp, the eggs (in the cells on the right) and the protective ‘stuffing’, I carefully picked it up and transported it  under the house – our place is on stilts. Carefully as I didn’t want to damage it, nor get damaged by an irate stinging wasp – those colours mean either ‘watch out, I’ll sting you’, or ‘I’m pretending to be able to sting you’. I didn’t want to call her bluff.

Wasp with nest and eggs

I’d say the above website nails the wasp as Polistes humilis – they “are aggressive with potent sting. They will attack and sting if their nest is disturbed”! I had kind of assumed that, to be on the safe side.

At Hastings Point yesterday, we investigated the rock platform. It’s a bleak environment for plants and animals – the rocks are mostly bare so there must be extremes of temperature, salinity and water availability. However, there are possibilities for snorkelling, as evidenced by two pairs of snorkellers, one pair from a canoe rigged as an outrigger – much more stable for getting in and out of wearing snorkelling equipment than an ordinary canoe. They also had a flag each attached, so seemed to be experienced or at least well prepared.

On the shore above the rocks I saw something I had never seen before – what I will call a tree shrine. There are many roadside shrines to people who presumably died in road accidents – usually crosses with artifical flowers, stuffed toys and trinkets. But this tree (photo below) had several metal plaques with the name of a person on each one, and many fresh frangipani flowers and broken shells at the base of the tree. The people seemed to be young – teenagers and as young as two years. You can just see the angel ornament. The tree has a lovely outlook over the ocean. 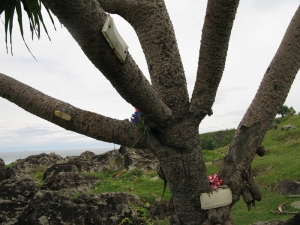 Here’s a Christmas tree with a difference, spotted at Nunderi yesterday.

A Christmas tree with a difference

Paul’s photos show the beginning of life for the adult cicada – below is the end for some.

At the Uki market yesterday, I bought some native seedlings – I have 20 acres, so plenty of room, although 10 acres or so is dry sclerophyll eucalptus with subtropical gullies (the result of land clearing, then banana farming, then reverting to regrowth eucalypt forest). One was a riberry, Syzygium luehmannii, and the seller had some fruits to taste. They look terrific on the tree make a good jam. Raw they are not too sweet, not too tart – unlike Davison’s plums which are very tart. I like the taste of both the raw riberry and the jam. I’m looking forward to sampling my own berries in a few years’ time.

We stopped off in Bangalow on the way back to do some window shopping and, lo and behold, there was a riberry in full berry outside Red Ginger, the Chinese grocery. I wouldn’t have recognised it except for eating some a few hours previously. So I scooped up a whole lot that had fallen on the ground in order to plant them.

There’s a photo of the berries and more info at:

Hallelujah! I was treated to a koala sighting at my neighbour Peter Wrightson’s place today. [Peter is the son of the late lamented Patricia Wrightson, who wrote Australian children’s books that I adore – Joy.] He had rung before I left for shopping in the morning to report excitedly that there was one up his red gum tree. I wanted to race right over, but had some pre-Xmas shopping in Maclean that needed doing. Did the shop, had lunch, unloaded groceries, and rang up Peter to see if I could go with him and his dog on his afternoon walk in case the koala was still there. He said it was, so I dusted off my 400 mm lens on my old film camera and rousted-up my monopod (a one-legged tripod that doubles as a walking stick). Urf, that thing is heavy, so into my good padded backpack it all went with binocs and water.

It was 29 degrees C and so humid just ahead of a rainstorm by about 4:00 p.m. when I joined Peter at his place down near the Broadwater. The land is more level there, with much bigger trees than here, and more lush and diverse vegetation. Peter had koalas 20 years ago in noticeable numbers, but they’d stopped coming when the Pateman’s Road neighbourhood started developing too heavily. Just in the past couple of years, they’ve started making their presence known again, and this was the second ‘koala-call-out’ I’d been invited to at his place.

Peter regularly walks his dog, ‘Bronte’, on his large wooded block, and had alerted him to the presence of the koala. She can smell a koala a mile away, remarkable since this one was probably 30 feet up a large, beautiful old red gum. The koala was resting in the upper branches, as they’re wont to do during the daylight hours. Without the dog, he doubted he’d have ever seen it. I pulled out my camera and screwed on the monopod, but no matter how far back I tilted it, the angle was just wrong. So I undid it, threw down my old sit-upon that I wove in Guides a few years back, and laid on the ground. I took a few pics, but as is usually the case around here, what one gets is a lovely photo of a furry bum and sprawled legs, but no head. Consoled myself with a couple shots of Peter and the red gum, especially the fresh scratch marks that help mark a koala tree. He also pointed out the ‘scat’ at the base of the tree, which is about the size of a plump kalamata olive pit. It did NOT smell like nice eucalypt leaves, but rather more like poo. He knows I’m trying to learn more about koalas, so had kindly collected a primo one earlier, which he proudly deposited in the palm of my hand in his kitchen later on. (I had him put it in some tin foil for the trip home.)

Koalas have been very much on my mind lately. Coincidentally? At the start of this week, I submitted my 20 pages of comment on Council’s draft Koala Management Plan for Ashby, something I’d spent 4 days solid working on. It’s important to me that they get it right, as I lobbied hard for this a couple years back, and my efforts with the help of Valley Watch are finally beginning to see fruition. Last week I got a letter from the local Catchment Management Authority saying my ‘Expression of Interest’ to have them prepare a property management plan for koala habitat on my land had been approved. (Yay! they do the work for free, and when the plan gets recognised, I’m eligible for grant funding.) Just yesterday, I had a Green Corps [Work for the Dole] group out to inspect our land ahead of doing some free work for us early in 2011. Since we’re in ‘core’ koala habitat, their manager had gotten in touch with Valley Watch, who then got ahold of me. Marnee and her crew of 8-10 strapping young men will come and spend about 6 days removing noxious lantana weeds, and planting free koala food trees that I can get from Friends of the Koala.

I haven’t seen a koala on or near our property for 4 years now, but long to see one again. My theory is, if you dream them, they will come. If not to me, to my friends, which is just as good!

Now what might this wonderfully hairy thing be? Let me know what you think! The prize is to avoid the scorn of avid photographer and artist, Paul Stevens, who took this one. A hint is the title of this post. 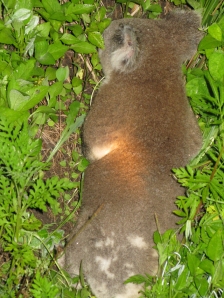 The most amazing thing happened last night. Andrew was computering away in the studio as is his habit. The night was warm, the moon bright, and I couldn’t sleep, so I was practising my harmony part for ‘Celtic Dance’ about midnight. I heard Andrew open his door, then exclaim, then a pause, then he came racing over. Good job he had heard me singing as it meant I was awake, but he would have woken me up anyway: A KOALA WAS TRYING TO CLIMB THE CORNER OF HIS STUDIO. AAAAAAAAAH!

It was one of the most thrilling moments of my life – what a privilege to be visited by a wild koala. We often hear them at this time of year, calling out for mates over the hills. Andrew had heard a scratching, scratching at the southern door of the studio. He went out the main door (the northern side) and around the front with a torch to investigate, to discover the koala at the corner. It dashed down the  path behind the studio, clambered up his Aphrodite statue which leans against the slope, and then stopped on the track above the studio. It was at that point he went and got me. We watched it by torchlight for 5 minutes or so, then left it in peace. WOW WOW WOW WOW!