Dinosaurs in the top paddock?

I’ve certainly got kangaroos loose in the top paddock – well, wallabies and no jokes please, fellow Aussies – but I’m stopping short of actually calling birds dinosaurs. Many scientists think birds are descended from dinosaurs, and some the other way round but, like any good scientific theory in the making, this is, as they say, controversial.

But I like the idea. In my mind this means giant parrots shaking the ground with their steps, and huge magpies swooping and causing tornadoes with their flight … I’m getting carried away.

We live on an 8 hectare (20 acre) property that is a mixture of environments. Half is what I euphemistically call Permaculture Zone 5 – ‘unmanaged bush’. It used to be subtropical rainforest on the edge of the Big Scrub, and the gullies certainly have rainforest plants in them. Our property backs on to a couple of MOs (multiple occupancies, or communities) that are very wooded, and then up and over the mountain to a State Forest area. So there are wildlife corridors and big areas of forest all over the place.

The area around our ‘little house in the woods’ has a large cleared paddock and a run-down macadamia plantation (providing at least 10 buckets a year of yummy organic maccas, and more if I can be bothered to pick them), interlaced with lots of weeds like lantana (which I justify as protective habitat for birds and possums against the feral cats and dogs that abound – but I really should get around to clearing it one day).

Now, all these different habitats have birds that like them, and when you live in the intersection, it’s a birdy bonanza! We had a Birds Australia area coordinator come to count birds here, and she saw (and heard) over 100 species in a morning without really trying.

I won’t bore you with my bird list, but here are some photos taken around the house.

This king parrot (Alisterus scapularis) loves stuffing his face with the pigeon peas just outside the loungeroom window. He’s often accompanied by a female, who is duller in colour. 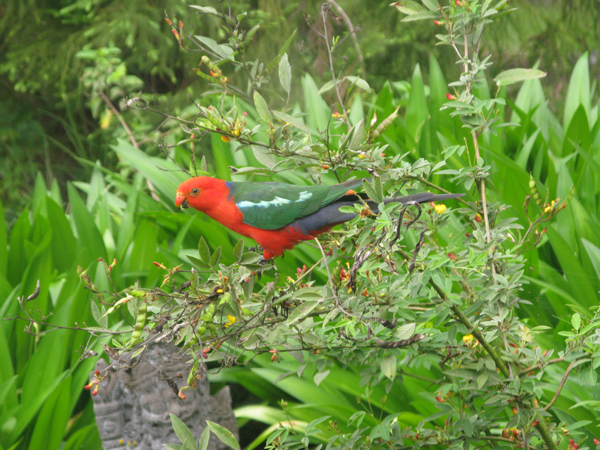 Yellow-tailed black cockatoos appear in flocks of thirty to fifty, and fly into the tops of our pines to shred the pinecones for their seeds. They have a really distinctive cry (check the mp3 on the link above), which alerts you to their presence (as well as the rain of pinecones attempting to kill you if you stand under the pinetree).

and the wonga pigeon (Leucosarcia melanoleuca) … 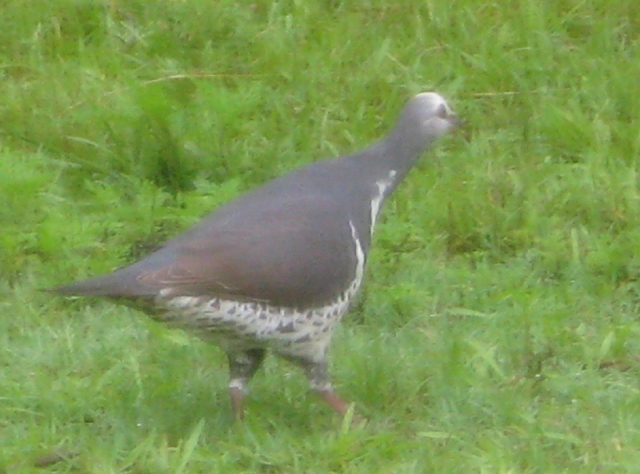 A wonga pigeon in a hurry

And then there’s the incredibly noisy koel (Eudynamys scolopacea). This bird is a visiting cuckoo that comes down from the north every year and drives us crazy with its call, most of the day and night. The call rises up the scale until you’d swear the bird is about to explode. The male is all black, and the female spectacularly patchy. the theory is that the call attracts the attention of local birds (mainly currawongs) to the male so that the female can sneak into the nest and lay an egg, which hatches into a chick that then gets raised by the cuckolded currawong. It’s a relief to everyone, humans and birds alike, when they head back north.

The birds doing the attacking are noisy miners, which hang about in groups of six or seven. They are communal breeders and on the defensive, especially when koels are around. This one’s having a drink and bath in my birdbath.

Another bird that takes advantage of my birdbath is the butcherbird, so named because it sometimes skewers its small-bird victims to thorns. We have both species – pied (Cracticus nigrogularis) and grey (Cracticus torquatus) – here. The pied has the most gorgeous fluting call, echoing through the valley. 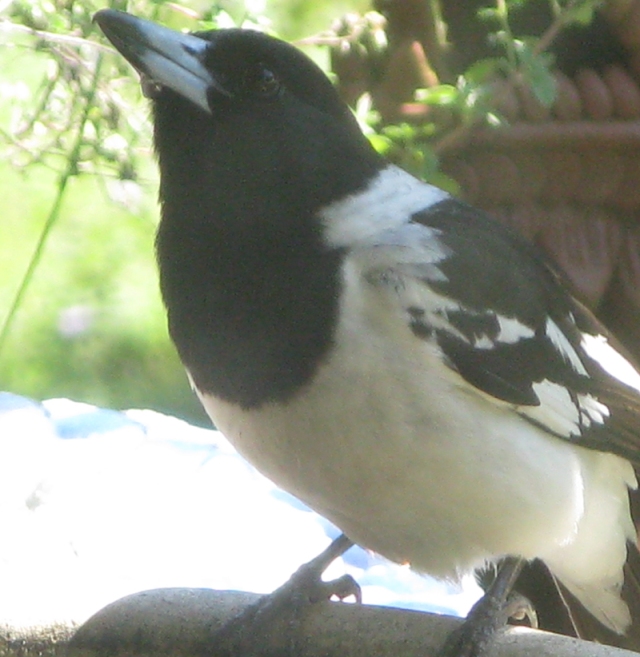 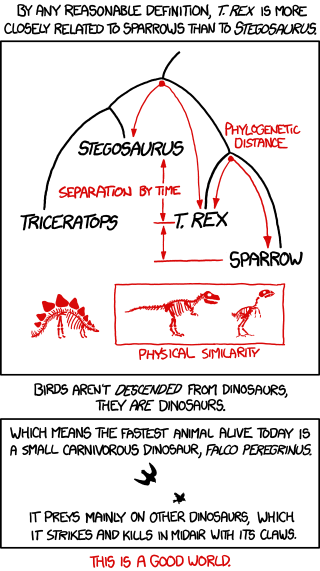 This entry was posted in Animals on land, Birds. Bookmark the permalink.

4 Responses to Dinosaurs in the top paddock?