Let Nature take its course … or not?

I’m often in a quandary about whether to ‘save’ an animal in distress, but I usually do. Take this example.

It was a ‘king tide’ on the coast at the weekend – a combination of autumn equinox and full moon produced high high tides and low low ones. On the reef at Woody Head, the shells, sea urchins and so forth were doing their level best to keep hydrated – staying well within crevices if they were able, or hunkered down close to the rock surface in the case of chitons and limpets that don’t generally move so much.

I found two small dead octopuses and one that seemed to have a spark of life left. 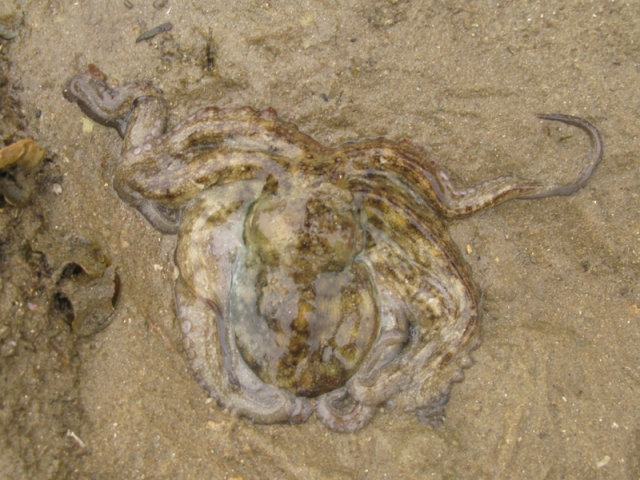 What to do? Leave it alone to die if the sea does not come back in time? If I wasn’t there, that’s what would happen. Pick it up and deposit it in the hope that it would recover? Maybe it was already too far gone, and maybe it was already at the end of its life cycle – male octopuses die within months of mating, and females die after their eggs hatch. (Three dead octopuses at once was a surprise, though.)

I decided to ‘interfere’, picked up the octopus with a flat rock and took it over to a pool that joined up with the sea. It waved its tentacles feebly, so I hoped it would recover. For the first 30 seconds or so, nothing happened – then it ‘unflattened’ and went white.

Then, quite suddenly, it turned brown to match its background, inflated even more and started ‘gasping’ – its whole head was moving quickly and the orange siphon pumping away. Octopuses take in water via the mantle cavity, it runs over the gills, which extract the oxygen from the water, and the siphon pushes the ‘used’ water out.

Seeing the octopus apparently spring back to life, I felt good. Then it occurred to me that I, being part of Nature, was letting it take its course after all.

This entry was posted in The sea, Travels. Bookmark the permalink.

2 Responses to Let Nature take its course … or not?