My friends Peter and Linda went to Lord Howe last year, and reminded me that I should get back there soon. They’ve kindly given me permission to use their photos.

‘Lovely’ doesn’t quite do it justice, but I would run out of superlatives if I even started trying to describe Lord Howe Island. I’ve been there a couple of times, and it’s probably my favourite of all the places I’ve been.  It’s certainly paradise for the natural history junkie, but not for the archaeologist – no evidence of ancient human settlement has been found. 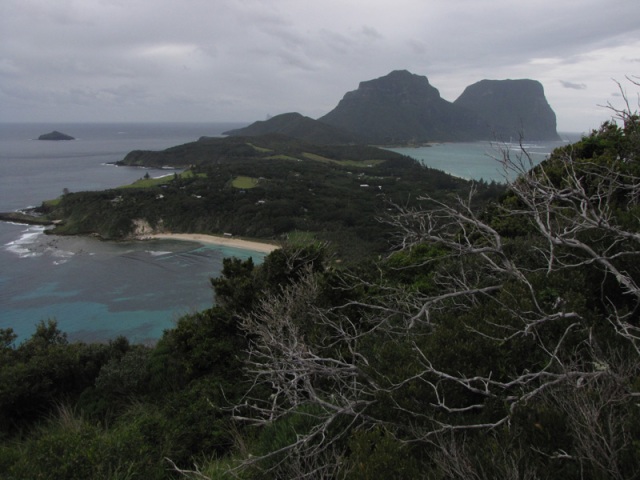 It’s only a couple of hours’ flying time from Sydney, Brisbane or Coffs Harbour. My first visit started with a terrifying flight through a thunderstorm. Hail lashed the front window, the plane (a 10-seater or thereabouts, so I felt much more vulnerable than I would in a bigger plane) was tipping and dropping; and the sky was pitch black except for flashes of lightning. I was sitting behind the pilot and watching him closely. I decided I would not worry if he continued to look calm, which he did. After we passed through the storm, I noticed that I could not unclench my fists for several minutes – at some level I was really scared! The thermos  flask of tea and the tin of bikkies passed around the passengers helped settle the nerves. The landing strip is very short, ending on the left (below) where the vegetation starts. The planes are 32-seaters now, I think.

Landing near the mountains

The island has a population of about 350 permanent residents, and a maximum of 400 tourists. You need a bit of cash to stay here – no camping is allowed – but there is a range of places to stay, from (relatively) budget self-catering to swish all-done-for-you.

It is popular with snorkellers and divers and rock-platform investigators and has the world’s most southerly coral reef.

My first trip was with a group. I normally don’t go on guided tours as I want to be flexible, but this time I wanted to pick the brain of the knowledgeable Ian Hutton. The second time I went with a girlfriend, and I had the fun of playing nature guide.

Being an island, there are many plants and animals that have evolved in isolation and are found only there. I’ll talk about them in another post.

Just walking or riding around is sheer pleasure, as there are few cars on the island and the tourists are encouraged to ride bicycles. Even with 800 people in peak season,their presence disappears when you walk away from the  village into the forest. 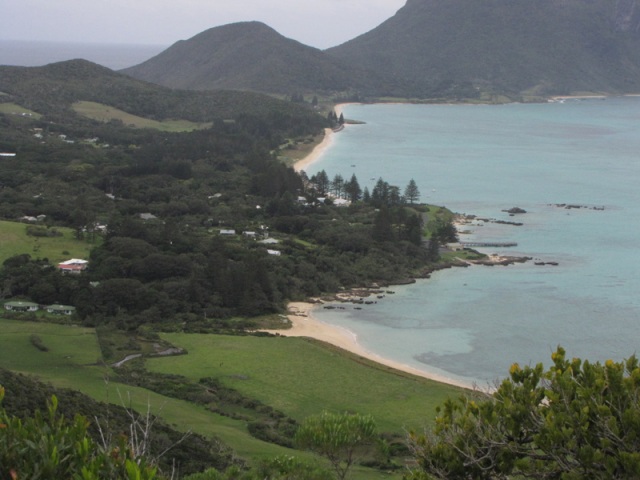 The village on the edge of the lagoon

One of the many things you can do is a day walk up Mt Gower. You must go with a guide – too many people have become lost in the wilderness in the past, and then time, money, effort and risk must be taken to rescue them.

The walk starts with a stroll through the boulders below the cliffs at the south end. It’s around here you get a sense of how high you will be going. As you rise, you start to see spectacular scenery of trees, cliffs and sea. The boulders start at the end of the sand (below), and the path climbs along the horizontal green line at the base of the cliffs in the distance on the right.

Over the boulders, you can see the next part of where you’re heading … the green line on the right. 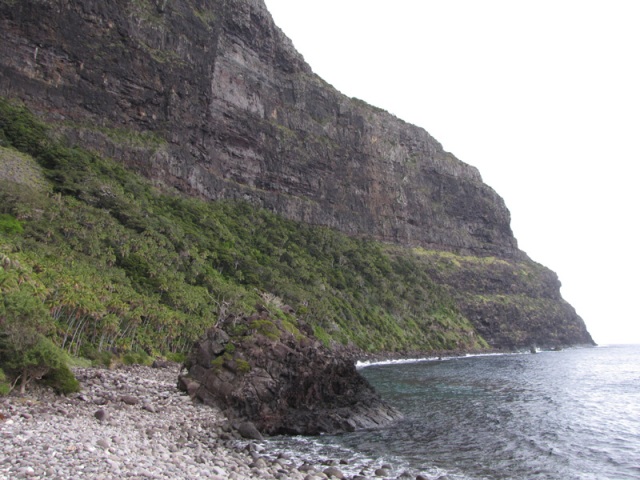 Through the boulder beach

The easy path at the base of the cliffs …

Path at the base of the cliffs

turns into something a bit steeper …

with a bit more of a view … 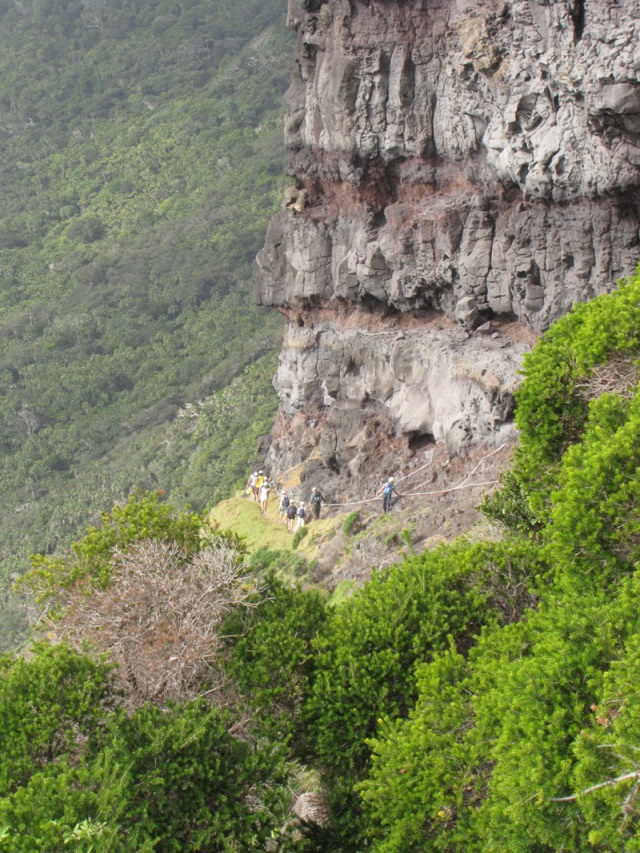 Well, at least we can see the view from here

and what a view … 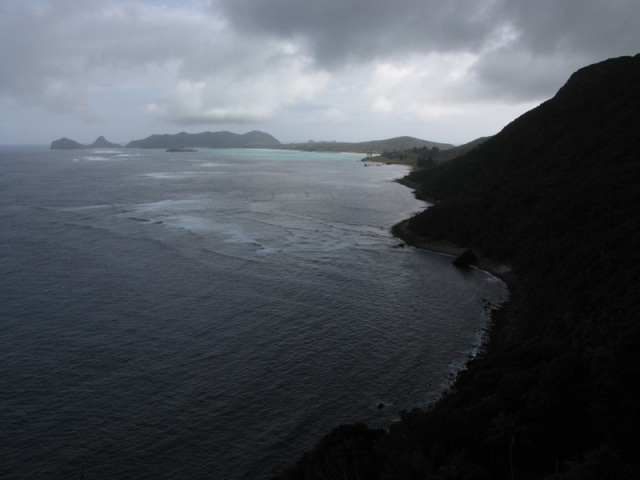 View of the lagoon to the north

There’s a lot of water coming down from the mist forest that’s at the top of the mountain. I’ll show photos of the plants up there in another post.

Waterfall viewed from the path

My own trip down from Mt Gower was a bit of an epic because, while we were up top admiring the ambiance, we heard thunder coming from below us. We looked down and were astonished to see that cloud had formed unbeknownst to us, and there was a big lightning storm that we would have to walk down through. We made it, through the gloom, lightning flashes, thunder and bucketing rain, with the path washing out and being hard to see with all the running water.

You don’t have to actually do anything to enjoy Lord Howe. I used to walk to the beach and mountain-watch, drift in my imagination with the ever-changing clouds in the mist forest, and think of dinosaurs up there eating the ferns and the mosses. It’s that kind of place.

This entry was posted in Travels and tagged Lord Howe Island. Bookmark the permalink.