On Boulder Beach, not surprisingly filled with boulders and pebbles, there’s a mass wash-up of Sepia rozella, a cuttlefish taken in commercial quantities. They grow to about 14 cm, according to Norman and Reid’s A Guide to Squid, Cuttlefish and Octopuses of Australia. Perhaps these were males that had mated and died all at once, as is their habit. The females linger longer to lay their cluster of eggs under a rock ledge and protect them, swooshing oxygenated water onto them. They basically starve to death as they spend all their time looking after the eggs. 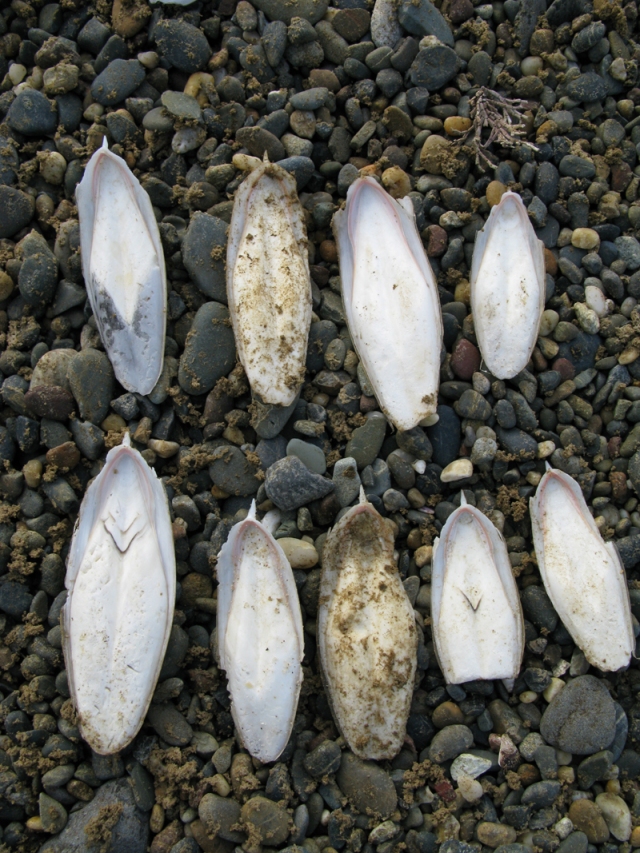 A few of the washed-up cuttlebones of Sepia rozella , the rosecone cuttlefish

I’ve been fortunate to see two giant cuttlefish (Sepia apama) on a July (winter) day, washed up at Waniora Point, Bulli, near Wollongong. One was mostly eaten and still being eaten by silver gulls. The other was mostly intact. Referring to my field notes, I see that it was about 104 cm long (including the tentacles), 60 cm wide across the body, and quite thick. It smelled of fresh calamari (no surprise there). The colour was basically white with brownish purple ‘stripes’, with a trace of iridescence visible around the head. I still have the beak I cut out of the mostly eaten one – it’s about 7 cm long. It was a real thrill to see these animals.

Giant cuttlefish breed through mass spawning in winter. One of these spawning sites is in the top of Spencer Gulf near Whyalla in South Australia. There’s concern that the BHP desalination plant scheduled to be built near Whyalla will affect their breeding. The cuttlefish are also caught in large numbers by fishermen.

SCUBA divers go to Whyalla in the breeding season to watch the spectacle. Apparently the cuttles are so wrapped up in each other (often literally) that they don’t take notice of much else. It’d be an amazing experience to be in the water with them.

This entry was posted in The sea and tagged cuttlefish. Bookmark the permalink.