Give me a minute while I extract my foot from my mouth. While it’s true that our spring has the lowest average rainfall in the year in this part of the subtropics, we do get the occasional east coast low weather system, which delivers deluges and tops up the rainwater tanks. That’s what’s been happening over the last week – 128 mL (nearly 8 inches) in the rain gauge over 4 days, then another 25 mL (1.5 inches) a couple of days later, plus some sprinklings, bringing August’s total to  180 mL (11 inches), compared to an average of 64 mL (4 inches).

There have been the usual windy and dangerous surf conditions associated with the low, so it’s a good time to see what’s happening on the beaches. There’s nothing like being on a windy, wild beach with no one else on it!

Lots and lots of dead and dying critters from the deep ocean were washed up along the high-tide line. Bluebottles (Physalia utriculus), by-the-wind sailors (Velella velella), the mollusc janthina  (Janthina janthina), porpitas (Porpita pacifica) and glaucus (Glaucus atlanticus) have an association in life as well as in death, and are the same shimmering dark blue although they are very different species. They tend to all wash up together, too.

Bluebottles are not one single animal, but several types conjoined, floating on the sea surface. One type provides the float, one the stings, one the stomach, one the reproductive organs. All benefit from the food, whch includes small fish and other small organisms that are caught by the fishing tentacles that have the stinging cells on them.

One of the many bluebottles washed in by stormy seas

If you see these on the beach, don’t go swimming unless you are prepared for intense, painful stings. I’ve only been stung once, and that was fairly mild compared to people who’ve had the long stings wrapped around them and run screaming from the water, marked by nasty weals. Even the stings washed up or bits churning around in surf are painful. First aid has changed over the years (vinegar, cola, sand), and now it’s ice, though where most people are going to get that on a beach, I don’t know – perhaps the nearest life guard if you are on a patrolled beach. Rubbing is not recommended, as it sets off more stinging cells (nematocysts). There’s an interesting paper on the structure of the stinging cells.

There’s a network of feeders upon feeders. Sea turtles and the aforementioned sea slugs Glaucus atlanticus, by-the-wind sailors and violet snails (Janthina species) eat bluebottles. The glaucus stores the stinging cells of the bluebottle for defence, so anything eating it will get a mouthfull of stinging cells. Janthinas eat Velellas amongst other things.

Unlike bluebottles, the Velella‘s nematocysts (on the undersurface) can’t pierce human skin, so there’s no nasty sting for us. Below you can see the ‘sail’ by which the wind blows the animals along the surface.

Violet snails eat by-the-wind sailors, and have tentacles with nematocysts to poison their prey. They float about upside down on the sea surface, courtesy of mucus bubbles. The  shell of Janthina janthina is pale blue on its top (so that any predator looking up at it will see it blending with the sky) and dark blue on the surface nearest the opening, at the water surface, so that any predator looking down on it sees the dark colour of the ocean and not the snail. The seed on the right, below, is that of a mangrove tree.

Violet snail, Janthina janthina - note the mucus bubbles and the difference in colour between the top and bottom surfaces of the snail

Janthina janthina has a sort of flattened shape, but another species was also washed up, possibly Janthina exigua. I’m putting in a couple of photos as these are not so common here.

This curve in the lip is characteristic of J. exigua

I’m curious why exigua doesn’t have the same colour gradation as janthina. The theory of protective colouration is so convincing!

Another thing often washed up along with the blue brigade is the internal shell of the deep-ocean squid-like mollusc, Spirula spirula, commonly called the ram’s horn.

Internal spiral shell of deep-sea Spirula spirula; note the drill hole of a carnivorous snail on the bivalve on the left 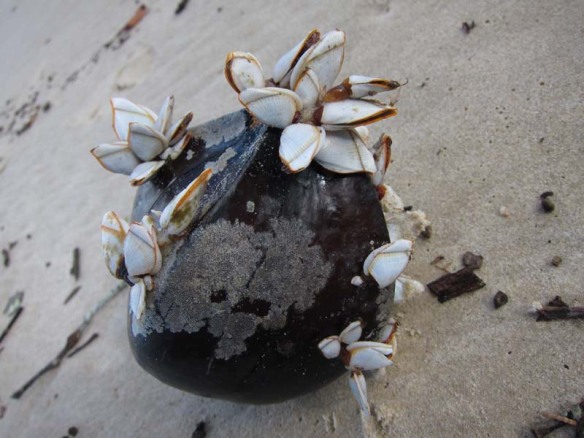 The white "lacework" is actually an animal, a bryozoan

Bryozoans are small colonial animals that encrust surfaces. They build a calcium carbonate protective case and filter out nutrients from seawater. Gooseneck barnacles also filter the water – these were still alive and were feebly extending their feeding tentacles, trying to eat even as they were drying up.

Storms has brought other corpses to shore – a gannet, so fresh that the crabs hadn’t got to the eyes yet. This is the second dead gannet in the last fortnight – perhaps in less stormy weather the bodies just float on the surface until they decay or are eaten by other organisms, so we never see them.

A kind of parrot fish? …

Not sure what this is

The head was missing on this bird, so I’m not sure what it was – black and white plumage and black feet.

There’s a lot of death associated with storms, but to end on an upbeat note – the  wattles (Acacia species) are blooming in the dunes, and their smell is so sweet and their colours so bright …