The increasing showers and rain that herald the wet season bring a lot of frogs out. The male is the noisy one, calling for mates. This one lives in a flower pot. This is probably a young Litoria caerulea, with the white spots running down from the eye, although not all L. caeruleas have that.

The chunky form, like this one from the back of Nimbin a couple of valleys over from me, is more recognisable as L. caerulea. By the way, caerulea means “blue”, and they were named originally from specimens that had turned blue when preserved. The describer obviously hadn’t seen them alive.

Here’s another frog from Nimbin …

It ain't easy being green; photo by Sheree Ford

The next four are frogs from up the top of the mountain behind me. First, L. caerulea again – they love bathrooms …

Litoria caerula in a favourite spot; photo by Heather Fraser 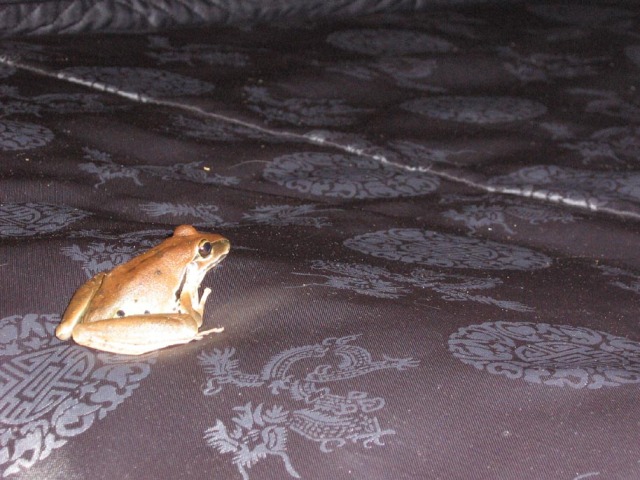 A couple of weeks ago I heard a frog I’d not heard before. Listening through David Stewart’s CD, “Australian Frog Calls: Subtropical East”,  I discovered it was Cyclorana brevipes. You can hear the call here. We in northern NSW are at the southern edge of its range.

The round structure behind the eyes is the tympanum, an organ for sensing vibration somewhat like our eardrums do.

There’s nothing like the smug feeling I get laying in bed listening to the frog calls on my iPod and ID-ing them comfortably there, rather than being out in the dark, cold and damp trying to find them. Call me lazy, I don’t care! Of course, Dave did the hard yards in the dark, cold and wet getting the calls in the first place, for which we froggos (and birdos who purchase his bird call CDs) are all very grateful.

By the way, the Michael Morcombe eGuide to Australian Birds (downloadable from iTunes) is very handy – I’ve got it on my iPod, so it’s light to carry around. Dave’s bird calls for each bird are in the eGuide, too – great for when you hear a call but don’t know or can’t remember the bird.

6 Responses to Frogs visible and invisible