No pirates in evidence, but we were in Penzance and staying at the Hotel Penzance, an award-winning boutique hotel for several years running  – a lovely site on a hill overlooking the bay, excellent facilities, a fabulous restaurant, pool and super-duper bathrooms. I don’t usually go for high-end places and this was not exactly budget accommodation, but I’d recommend this place to anyone who wants a bit of luxury. Unless they are allergic to cats, in which case don’t go near the place. The hotel’s several very fluffy cats wander at random – they love to run into your room and lay on the bed as soon as you open the door.

The shot below shows the view from one of my windows – a yacht race in the bay at 10 p.m. (the days are long in mid-summer in England). St Michael’s Mount (visited the next day) is on the horizon to the left. The white bit further to the left is the village of Marazion. 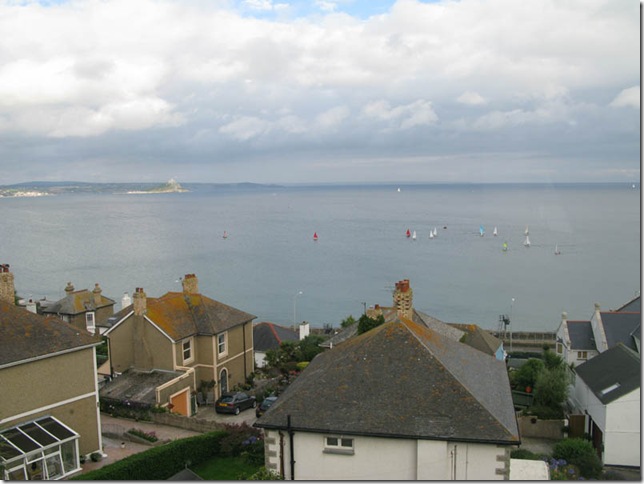 I enjoyed wandering around the town after hotel check-in, trying out the enormous Cornish pasties and admiring the fishing boats in the maritime area, the small but pretty parks (with surprisingly subtropical palms and suchlike plants – the warm Atlantic current allows them to grow), the narrow high street (what we would call the “main drag” or “main street”) and roads with interesting shops on either side (Woolworth’s had Dr Who merchandise, but nothing I had to have), and the combined museum/art gallery. It’s always fun stumbling on something like this when you least expect it …

The Egyptian House, a private house in Penzance, sticks out compared to the more traditional architecture in its street.

Cornish pasties are a bit nostalgic for me. I grew up eating them  for lunch in South Australia. Some of my relatives still live in the small tin-mining towns of Kadina and Moonta, where Cornishmen dug for tin in the early days of South Australia until it ran out. My mother’s family came from Cornwall, and I’d love to do a bit of genealogy here one day. A Cornish festival is still put on in Moonta every year. But the Cornish pasties in Cornwall are about twice the size of those available at home, and each one made two handy snacks for energy when walking around. The boutique bakeries make them with interesting fillings rather than straight meat. In the “old days”, the women used to fill a piece of pastry with left-over meat or vegs from the previous night’s meal and bake it. Their husbands took this lunch down the mines. The pasties were handy, literally, as the men would eat them holding onto the thick pastry at each end, then just throw away the crusts that weren’t eaten. That way they didn’t have to have plates and knives or forks or anything but their fingers. When I heard this, I understood the function of those crusty ends that seemed a waste of inedible space to me. We pronounce them “pah-sties” in S. A. (long “a”), but New South Welshers are correct in pronouncing them the Cornish way – “pass-ties” with a short “a”.

Cornwall is full of prehistoric ruins. You can get an idea of just how many here. Later in the day we drove down ever smaller country lanes through tiny farming villages, with ancient stone buildings built right on the road, to Carn Euny with its ruins of an Iron Age settlement and fogou (pronounced ‘foo-goo’, Cornish for underground cave, used as a ritual site or perhaps a shelter or food storage chamber – who knows?), dated to about 5000 BC. 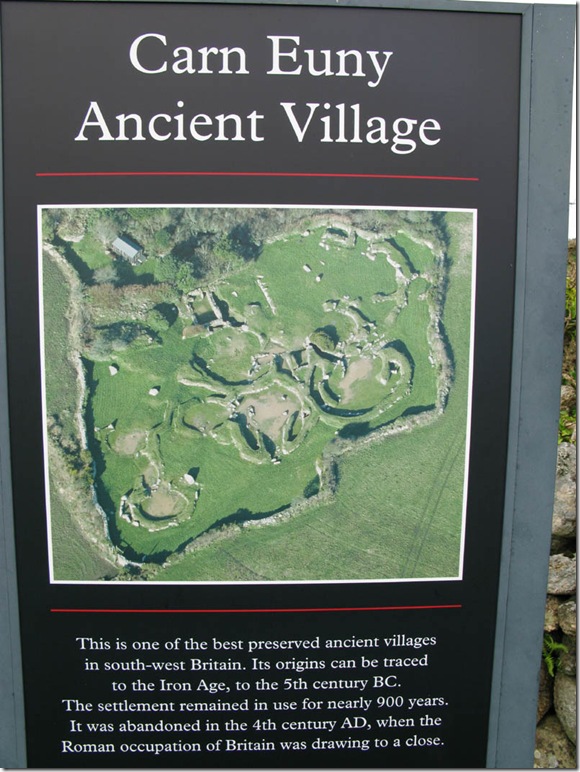 The entrance to the fougou

Looking from the central round chamber to the entrance. The fogou had luminescent fungi all over the walls (green, at right).

This whetted my appetite for a big walking day on the moors (cue “Hound of Baskervilles” howling) tomorrow.

Today was a big walking day on the moors. Luckily there were many tracks over the landscape, as going cross-country was difficult. I tried a short-cut between tracks, and discovered the gorse is very prickly and slow-going. Here’s the famous Men An Tol stone site … 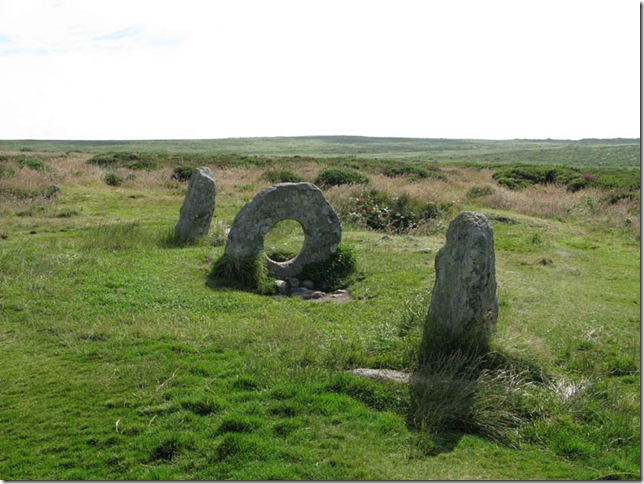 Naturally we all had to crawl through the central hole of the Men an Tol to cure our several “ailments” – it was traditional, apparently. I’d seen photos of this famous landmark in books, but hadn’t realised how small it actually is – the stone with hole wouldn’t have been much higher than my waist.

After a bit of wandering to a few tors (rock stacks in the flat landscape) and actually getting lost on the moors (hurray for fine weather and mobile phones), we drove to the Nine Stones (or Maidens) of Boskednan – we had more moor-bashing to get to there, and I counted ten and a half.

Next stop was meant to be the Merry Maidens, but Lanyon Quoit was conveniently on the way …

Lanyon Quoit used to be much taller – I couldn’t stand upright under it, but a man sitting on horseback used to be able to fit. The arrangement fell down in a storm in 1815 and was raised to its now shorter height.

On the way also were Madron Well and Chapel … 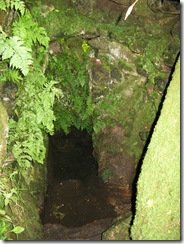 And here are the Merry Maidens – the stories around many of these groups of standing stones seem to involve young women cavorting when they oughtn’t and getting turned to stone in consequence. Seems like a conspiracy to prevent fun to me!

I found it astounding to be able to just walk into a field and run into stuff like this.

Dinner was in Mousehole (pronounced something like “Mowzl”), yet another picturesque Cornish fishing village. The Indian curry, made by real subcontinental Indians, was excellent. 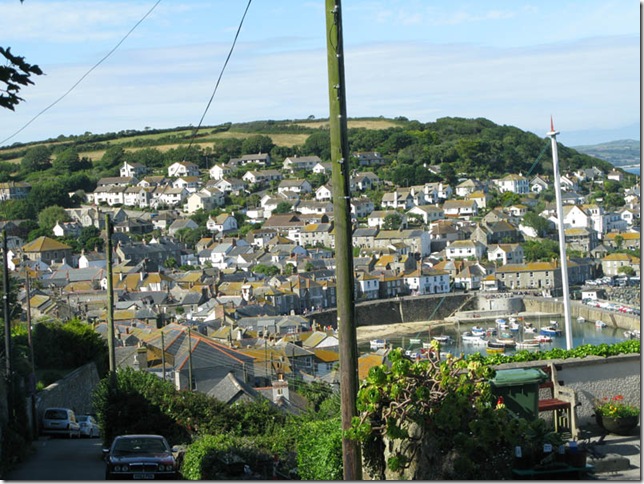 Like many Cornish fishing villages, in the “old days” some Mousehole folks supplemented their income with less-than-legal activities. Cornwall abounds with craggy seacaves perfect for hiding loot and looters. The coastline is wild and romantic, and the surfers enthusiastic. I hadn’t seen so many Kombi vans (called just “campervans” in the UK) since Byron Bay.

We drove to the village of Marazion just east of Penzance, and caught a little boat to St Michael’s Mount.

We’d planned to walk over on the old stone walkway like pilgrims did in the olden days, but you can do that only when the tide is out. It’s now a private residence, and not far away over the water is Mont San Michel, it’s sister citadel in France. A few hours there reveals a most impressive castle and gardens with ye olde furniture, paintings and weaponry. I can’t imagine what it’d be like to live in a place with so much history, or one where hundreds of tourists a day come to visit. Still, it’s a living for the owners. 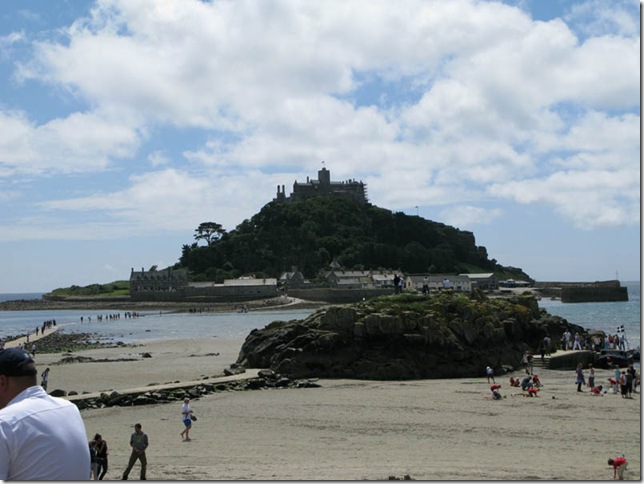 Tide is out – the “pilgrim way” to St Michael’s Mount 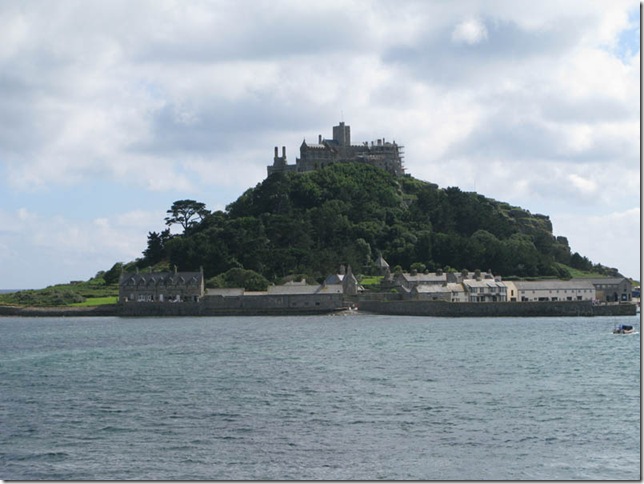 The citadel of St Michael’s Mount

Dinner was at the Turk’s Head in Penzance. The pub food was pleasant and not too expensive, especially if you took a “doggy bag” for left-overs. I enjoyed sampling small glasses of boutique beer and cider, more readily available than at home in Oz. It had been a fine warm day, but the pub was still uncomfortably heated. I get the impression the Brits don’t know how to handle heat, but they handle cold well. Tomorrow was to be our last day, alas.

One final stop before returning to Heathrow – Cerne Abbas. The village did not come across as “touristy” – I got the impression that tourists came to see the main attraction, which is outside the village, and didn’t venture in. It is indeed a most impressive ancient village with ancient village houses …

… the obligatory ancient church (circa 987 AD), abbey, graveyard and sacred spring (this time St Catherine’s, the Christian martyred by means of the St Catherine’s wheel, and associated with the much more benign Catherine Wheel firework).

Catherine’s wheel at her well

And of course there’s the Rude Man, which hadn’t been scoured lately, so the outline was a bit faint. There was an apologetic note, from the local scouring committee, pinned to the fence, to the effect that they would get onto it shortly.

Then a headlong rush along the M3, waving to Stonehenge on the left, to London, and my final hotel overnight at Heathrow. It was a bit of a shock to be away from the pleasant countryside and history of Cornwall. I somehow ignored the noise and pollution in my tiny hotel room, and got up 5 am-ish next morning to catch the 26-hour flight home to Brisbane, thence to the wallabies.

The trip was relatively short, but covered a lot of territory and history. Britain has layers and layers of history in its ground, as anyone who watches Time Team can attest. There’s been at least 40,000 years of human habitation in Australia, too, and I mean no disrespect but I do enjoy connecting with the artefacts and old places of my European ancestors. Look far enough back and even the Aborigines came from somewhere else. Neil Oliver sums up in his book, A History of Ancient Britain:

By contemplating the ocean of time beneath us we are reminded that people, gradually evolving to be more and more like us, have found ways to survive for millions of years. Our existence in the here and now is no fluke. It has been the work of the ancestors, all the nameless individuals who somehow lasted long enough to make the people who made us. How they achieved this is no secret. It is all right there. We have only to remember to look down.