How cool is science? How cool is art? How supercool is it when they get together in mind-boggling ways? This is what happened with one of the art installations at the 2012 Biennale in one of the old warehouse spaces on Cockatoo Island. The creators are Maria Fernanda Cardoso and Ross Rudesch Harley.

END_OF_DOCUMENT_TOKEN_TO_BE_REPLACED

Cockatoo Island is made of sandstone – the same beautiful sandstone from which many old Sydney buildings are fashioned, quarried mostly from Pyrmont in the early days.

Convicts hewed the stone to make barracks and residences for their overseers, and many of these residences are well preserved and available for tourist hire. Other buildings did not fare so well. Their decay is often just as artistic as many of the Biennale projects. 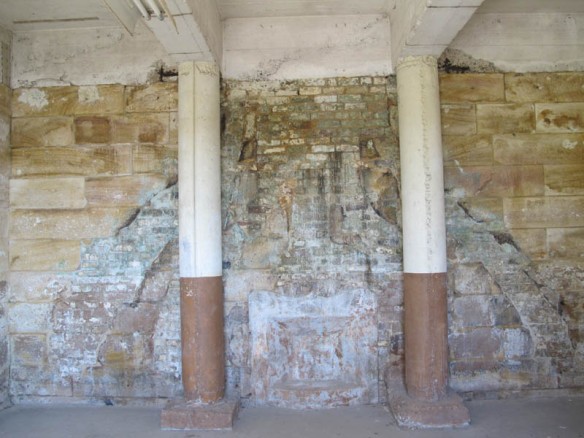 END_OF_DOCUMENT_TOKEN_TO_BE_REPLACED

Or should that be “a fascination of ruins”? A much better collective noun than the usual “mass of ruins”.

In 2010 Cockatoo Island, together with 10 other historic convict sites in Australia, was inscribed on the UNESCO World Heritage List. The sites were recognised as the best surviving examples of large-scale convict transportation and the colonial expansion of European powers through the presence and labour of convicts.

The island was originally a penal settlement, and the convicts themselves built barracks, a guardhouse and residences for their overseers. Later, convicts were moved off the island and it was used for a school and a reformatory, then shipbuilding, then back to being a prison. Shipbuilding expanded from the 1900s and it became an important facility until 1992, when the shipyards were abandoned.

It was opened to the public as a historical site in 2007, after I had left Sydney, so I’d never been there before. Volunteers are actively renovating buildings and machinery, and it’s a place with real atmosphere. You can read its detailed history here and here.

The island just hosted part of the 18th Biennale festival of contemporary art. The big industrial spaces were perfect for the large installations (which I will post about later).

Not everyone likes industrial archaeology, but I do. The trip starts with a 30 minute ferry ride across one of the most beautiful harbours in the world (I do love that harbour. We lived in the inner city for 12 years and often went after work to the docks to watch the ships come and go. Many of those docks have now been gentrified into multi-million dollar apartments and restaurants.) I loved the old rusting machinery, the old industrial buildings and the sandstone ruins, and the sense of history that goes with them. Here are some examples.