Peter has been busy with his underwater camera. He found some nudibranchs while snorkelling at Woody Head, northern NSW. Many thanks to Peter for letting me use his photos.

I’m sure you know already but, in case you don’t, the name  ‘nudibranch’ means ‘naked gill’. Nudis are (usually) tiny molluscs that are brightly coloured and apparently taste ghastly to potential predators (at least according to Ed Ricketts, who had a chew). They have been measured at 6 mm to 31 cm (0.25″ to 12″ for you imperialists).

They are carnivores that slowly ply their range grazing on algae, sponges, anemones, corals, barnacles, and even other nudibranchs. To identify prey, they have two highly sensitive tentacles, called rhinophores, located on top of their heads. Nudibranchs derive their coloring from the food they eat, which helps in camouflage, and some even retain the foul-tasting poisons of their prey and secrete them as a defense against predators.

Nudibranchs are simultaneous hermaphrodites, and can mate with any other mature member of their species. Their lifespan varies widely, with some living less than a month, and others living up to one year. …

Some nudibranchs are solar-powered, storing algae in their outer tissues and living off the sugars produced by the algae’s photosynthesis.

The first is Hypselodoris maritima … 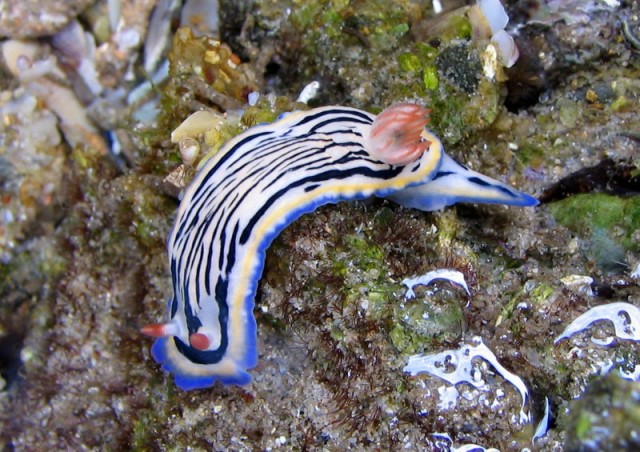 Here are some more Peter found …

Here is Dendrodoris nigra. In the last couple of shots, the ‘branch’ (by which they take in oxygen from the seawater) of the nudibranch is out, whereas in the first two it is not so visible. 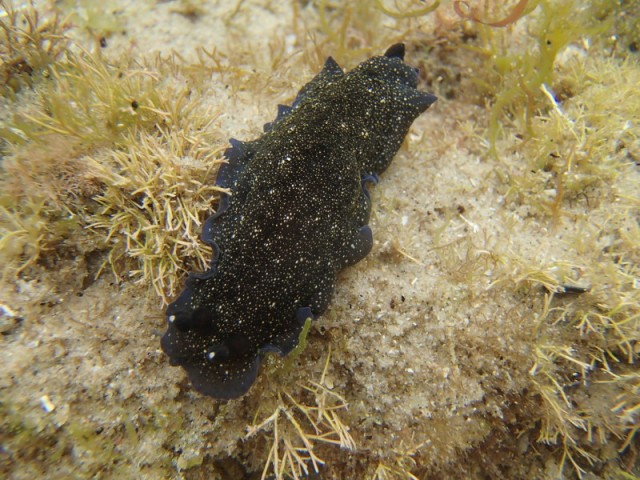 In case you are wondering what a 12″ nudi might be, it’s the splendid Spanish dancer (Hexabranchus sanguineus). Peter took this one on Lord Howe Island …