Fungi in the forests

I know very little about fungi except that it is always a delight to see them. The part we see, as you may know, is only the fruiting body. The ‘body’ of the fungus itself is underground.

The main body of most fungi is made up of fine, branching, usually colourless threads called hyphae. Each fungus will have vast numbers of these hyphae, all intertwining to make up a tangled web called the mycelium. The mycelium is generally too fine to be seen by the naked eye, except where the hyphae are very closely packed together.

[The] fungal mycelium is mostly hidden from human view, not only because of its small size, but also as a result of its location. The tangled mycelial mass is usually hidden deep within its food sources, such as rotting matter in the soil, leaf litter, rotting wood, or dead animals. The mycelium remains undetected until it develops one or more fruiting bodies, containing the reproductive spores.

We did not go on a ‘fungi foray’ on the course, but I stumbled upon some anyway. The IDs, and any mistakes, are entirely my own (unless otherwise specified), using Frances Guard’s (and others) book, Australian Subtropical Fungi, and Australian Fungi – A Blog. Corrections are humbly appreciated.

Phylloporus species, a gilled bolete – it was massive!
(ID by Frances Guard) Boletes normally have pores rather than gills, but this one has been DNA’d to boletes.

Stereum ostrea? These break down wood. 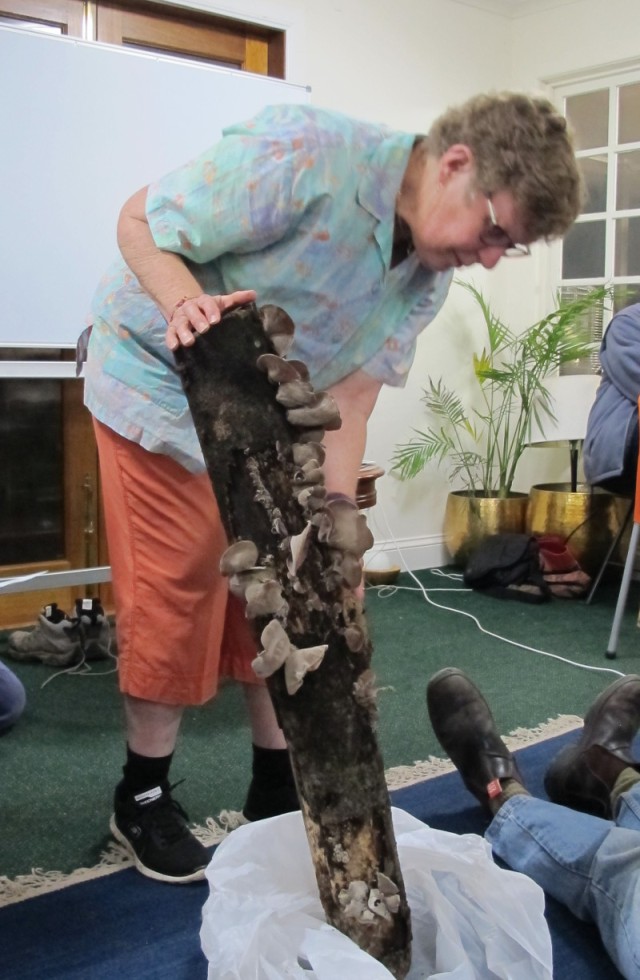 Aricularia cornea (cloud ears) – these were so soft to touch

Fran gave a one-hour talk on the basics of fungi, which you can pick up in any field guide or on the web, so I won’t regurgitate them here.

Next post will be on those tiny treasures, the subtropical invertebrates.

This entry was posted in Fungi and tagged Booroobin, fungi. Bookmark the permalink.