Some of the many enjoyable activities on the Hinterland Bush Links course involved the invertebrates of the subtropical rainforest. Our fearless leader was the enthusiastic Michelle Gleeson (of Bugs Ed and author of Miniature Lives).

Michelle Gleeson showing one of her bug boxes

These bug boxes, which Michelle uses for her educational presentations, contain a selection of impressive beasties not just from Australia but from all over the world.

Michelle led us to likely spots to catch bugs. First was the important occupational health and safety chat. Then we were shown how to use various pieces of equipment. 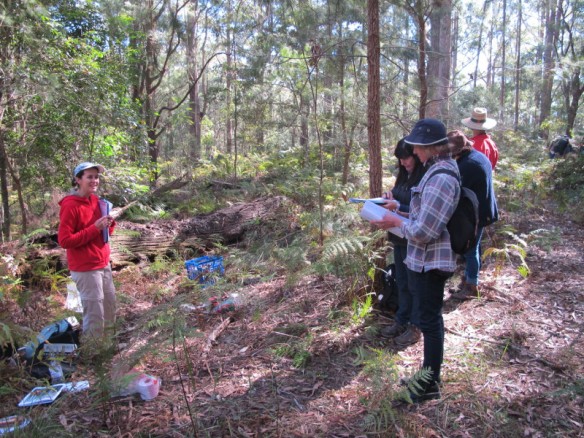 Then heads down and bums up …

Bugging in the blackbutt 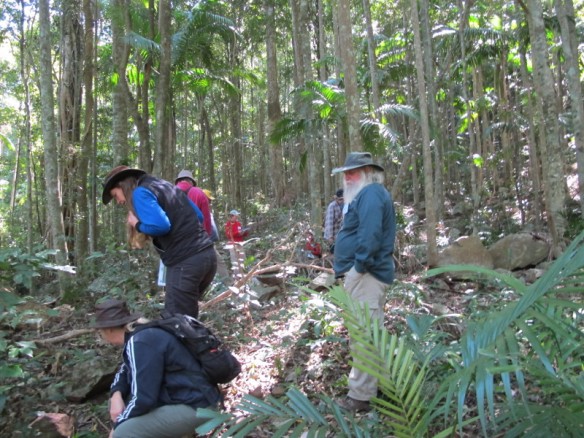 Here’s the famous bush-tucker, witchetty grub, wood-eating larva of one of several moths. 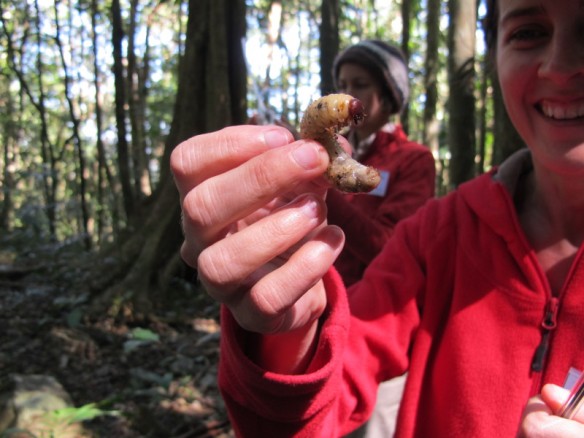 Don’t lean against a tree with the web below on it. Underneath the web is the highly venomous northern tree funnelweb (Hadronyche formidabilis). You can see the silk triplines that alert the spider to things crawling over the surface – then it will rapidly leap out and grab its meal, retreating under the web in a split second. 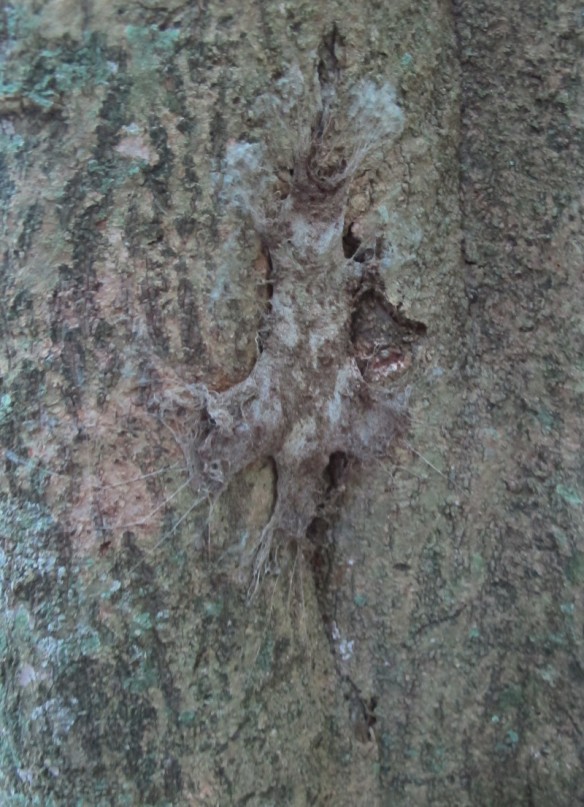 If you looked under that web, you would probably see one of these …

Most funnel-webs are ground dwellers but a few live in trees. The largest of all funnel-webs is the Northern Tree Funnel-web Spider, Hadronyche formidabilis, reaching 4 cm – 5 cm body length. These spiders live in the wet forests of northern New South Wales and southern Queensland and have been found over 30 m above ground. While many have their retreats in surface-opening branch rot-holes, some spiders appear to live and feed entirely inside the deadwood pipe of large forest trees like Tallow-wood, feeding on beetles and other insects inside this rotting wood habitat.

That tree was alive, though.

There were a lot of spider holes in the ground. Tony Bright thought they’d belong to trapdoor or wolf spiders (not all trapdoor spider holes have trap doors). Sometimes they can go as deep as a metre.

This trapdoor was very well camouflaged by moss on top.

While we’re on the subject of spiders, there’s a good article on Australian huntsmen here.

Among other finds were the egg case of a praying mantis …

and a case moth’s larva case …

Setting up a light trap at night did not attract many insects, perhaps because it was too cold …

But this cute little moth did appear …

Michelle told the intriguing story of the interaction between cycads and their pollinators, certain thrips, which eat the pollen. Science Daily writes about it here. Cycads come in separate male and female plants, and the males produce pollen for up to four weeks a year (depending on the cycad species). During this time, the male cone, in which the thrips live, heats up in the morning to something like 25 degrees above the air temperature, up to 38 degrees C (100 degrees F). This causes the thrips, with accompanying pollen, to leave as they can’t take the heat. The male cones also emit an airborne chemical toxic to thrips, making sure they go. The thrips float around and head for a female cone, which has emitted a pollen-like odour to attract them, and pollinate them with the pollen they’ve carried over from the male cone. (This is known as push-pull pollination.) The male cones cool down and stop emitting the toxic chemical later in the day, attracting the thrips back for another shot at the pollen, and round and round it goes for the pollination period. Cool, huh? Or hot, depending on the time of day. 🙂

Despite contracting scrub itch (aka chiggers in the USA – perhaps allowing your study subjects to get a little too close to you?), I have to wholeheartedly endorse Michelle’s message …