The rock pools at Flat Rock have been covered in sand for a few months, but gradually the sand is clearing and seaweeds and algae (with associated fauna) are coming back. The lowest tides of the spring give a good opportunity to go further out on the platform than usual.

Here’s a nudibranch I’d not seen before, although they are apparently common – Sebadoris fragilis. They grow up to 12 cm and this one was about 8 cm long. (IDs courtesy of Nudibranchs of the Sunshine Coast). 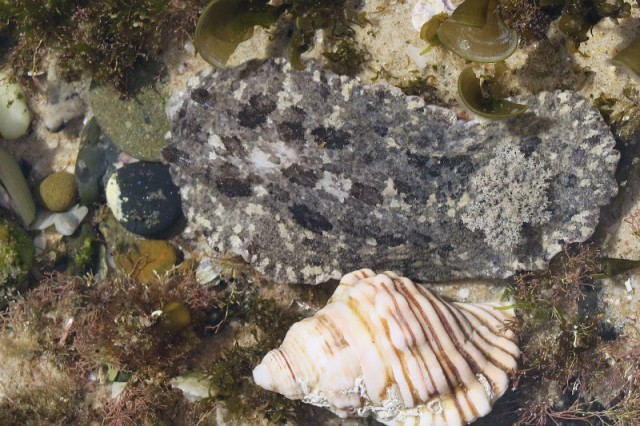 There was only one Discodoris fragilis, but over a dozen Plocamopherus imperialis – breeding time? They can grow up to 10 cm, but this one wouldn’t have reached 2 cm. 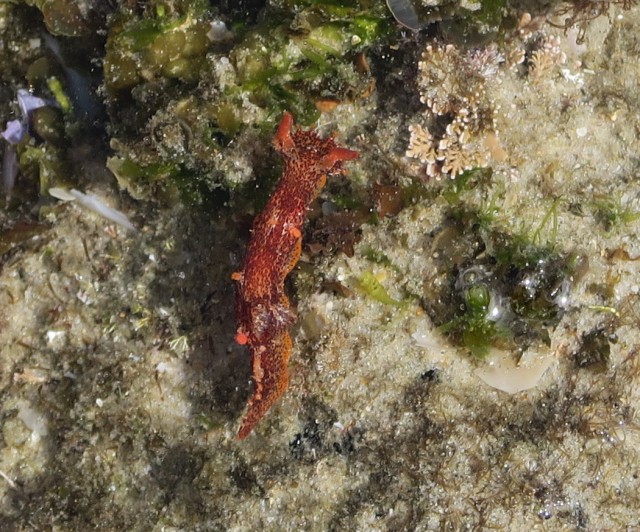 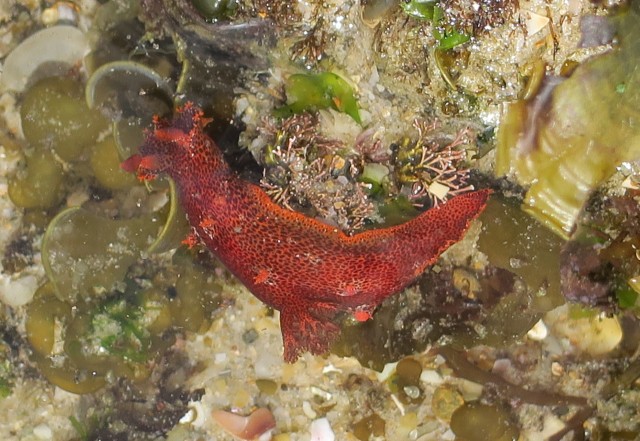 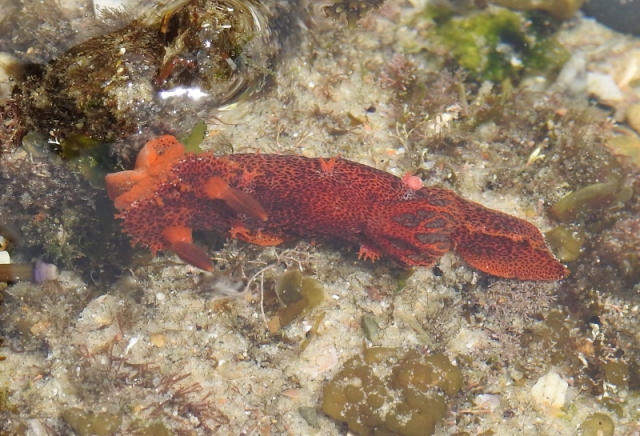 Below is possibly Kaloplocamus acutus – if it is, it’s way off the 6 cm length of adults. This one might have been 1 cm. 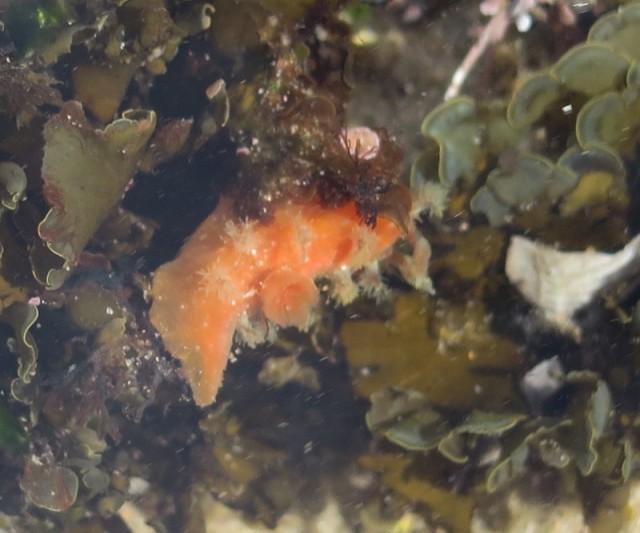 It was definitely breeding season for the limpets …

… and the cartrut shell (Dicathais orbita). The egg cases are yellow when ‘fresh’ and go purple after a while. (The purple cases below are in front of and separate from the yellow cases behind.)

Cartruts in the process of laying eggs 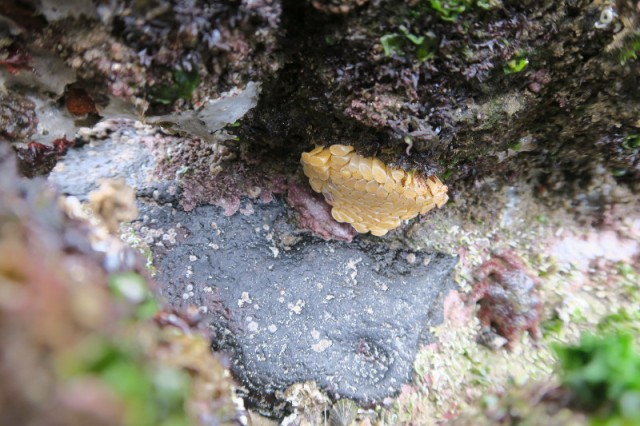 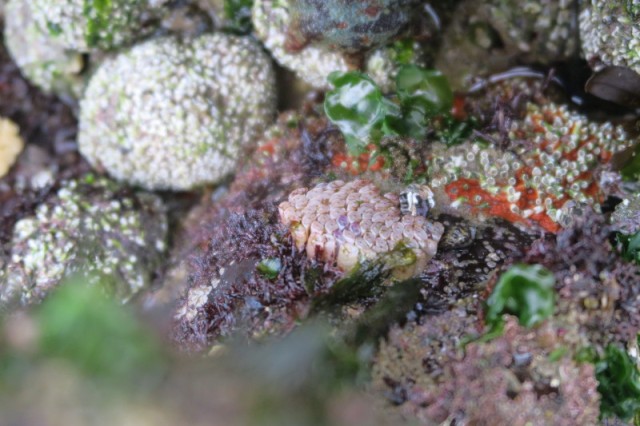 This live shell (possibly Cabestana lampas) is common, but I saw only one …

Note the ‘eye stalks’ and siphon (left); photo by Andrew

We saw three small sharks resting in the crevices, but it was impossible to get decent shots because the water was rippling through fast. One was a clearly a wobbegong but the other two were different.

There were over a dozen sea hares, perhaps in preparation for mating, too. They form mating chains, one behind the other. 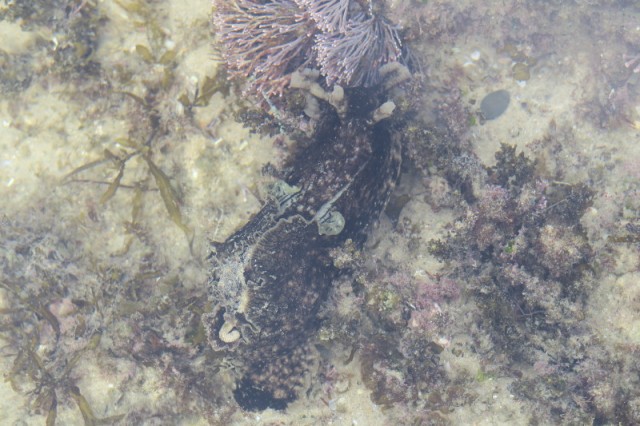 A lot of birds were resting on the platform. It annoys the heck out of me when people allow their dogs to run free there – no dogs are meant to be on the platform, and only dogs on leashes on the beach. The migrating seabirds need rest and refuelling.

A pair of beach stone-curlews (Esacus magnirostris, aka beach thick knees because that’s what they have) flew quickly past, crying their curious call. It was the first time I’d seen this species in the wild. 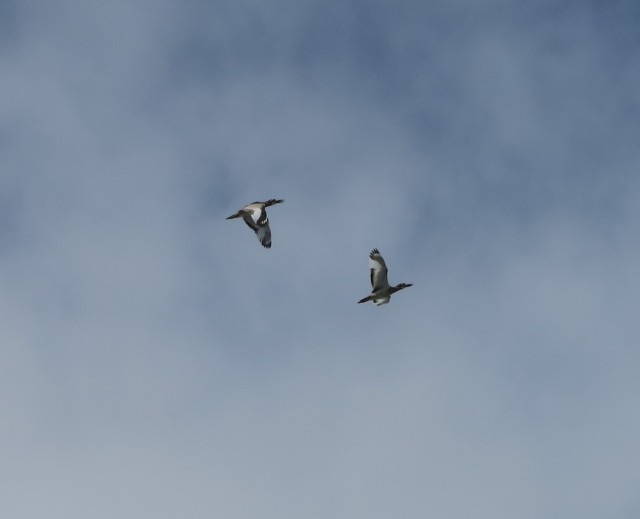 I think the birds below are sandpipers, but there are a lot that look alike and I haven’t worked out how to distinguish them yet. Any ideas appreciated.

This entry was posted in Birds, The sea, Travels and tagged Ballina, nudibranchs, rock platforms. Bookmark the permalink.