A tree of cultural significance

A couple of weeks ago I made a very short trip to Sydney to visit Prue, whom I had met on the subtropical rainforest ecology course in Maleny last year. She was about to embark on a camping trip in Tasmania, and I wanted to catch up before she left. I squeezed the trip in between two jobs – sorry to other Sydney friends whom I didn’t have time to visit. This time of year is always busy for me with textbooks, so I might get down again in winter when work slows down.

Prue lives in the Blue Mountains, west of Sydney, and is a keen bushwalker and botanist. It was great to go on some short walks with her off the Bell’s Line of Road side of the Grose Valley. I’d done a fair bit of bushwalking from the Katoomba side when I lived in Sydney because it was easy to catch a train up and walk from the various railway stations to the walks. 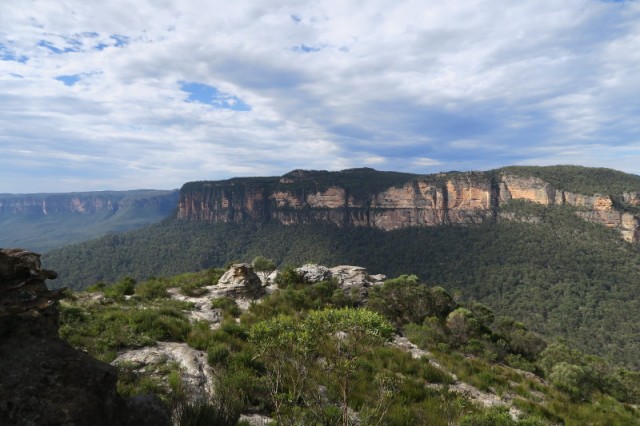 One of our walks was the Waterfalls Walk at Mt Wilson. Sharp-eyed Prue spotted this tree (Eucalyptus cypellocarpa), and we immediately grasped its possible significance.

I did some research on the interwebs and there were three possibilities: (1) a natural scar; (2) a marker tree made by Europeans back in the day (or later); or (3) an Aboriginal carved tree. There are a lot of sites of Aboriginal heritage in the Blue Mountains (see Assessment of Aboriginal Cultural Heritage Values) so I wondered whether this tree had been recorded. There have been a lot of surveys up there, so I thought it highly likely.

First port of call was friend Betty, a retired botanist and former education officer at the Royal Botanic Gardens in Sydney. She thought the shape was too regular to be a natural scar, and suggested it could be a mark made by early explorers tracking their path, or maybe an old land division or fence line. The remains of a famous “explorers’ tree” at Blackheath (also in the Blue Mountains) have been documented in detail here.

So I got on the research trail (which I enjoy). First was an email to the Australian Museum in Sydney. I figured they might have someone who knew about that tree. Turns out not, but they suggested I try the Royal Botanic Gardens. Turns out not, but they suggested I try the National Parks and Wildlife Service in Blackheath. The trail got warmer then, because they have an Aboriginal Heritage Conservation Officer. But she was on leave. (Ain’t research fun!) When she got back from leave, she replied that it appeared to be a tree of Aboriginal cultural significance – eureka! But she had to check earlier surveys and would get back to me when she found out. That’s where we are at the moment, and I will update when I find out. If Pure and I saw that tree, surely someone else would have documented it. It’s not exactly hidden.

Another place of Aboriginal cultural significance is the Emu Cave. It is not marked on the road and I am not saying where it is, but it was an impressive place to see. I would never have found it on my own, so thanks, Prue. The walls are covered with carved emu footprints. Sometimes I look at this photo and it seems like the footprints are raised, but they are actually carved into the rock. Other times I look at it and they look engraved. Weird!

According to Attenbrow’s 2010 book, Sydney’s Aboriginal Past : Investigating the Archaeological and Historical Records:

a radiocarbon date was obtained from a mineral crust formed over an engraved bird track, one of 172 recorded engraved figures in the [Emu Cave] rockshelter. This crust provided a minimum age of 1790 years old for the engraving, though the authors [of an unpublished report in 2003 = Taçon et al.] contend they may have been made hundreds or thousands of years earlier.

I do like finding archaeology but being in places of significance to an ancient but living culture is different to digging up your average field in, say, Britain, where the culture of the artefact makers has long gone. ‘Aretfact’ seems an inappropriate term to describe these footprints. Much more respect is involved and you feel a connection to the people who made the thing you are looking at because they are, in a sense, still around. At least I do.

Prue’s house is on 9 acres, which she is successfully restoring to rainforest. On a short walk around one day, we were privileged to see Australia’s largest owl, the powerful owl (Ninox strenua). Ours didn’t have a possum in tow, like the one below. Yum! 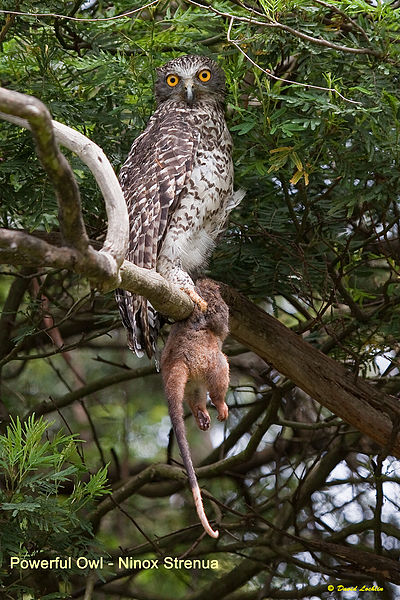 We also saw the eyeshine of what Prue assured me was two greater gliders, Australia’s largest gliding possum. They certainly didn’t move like common brushtails. They were too far away up a very tall eucalypt to see properly. Here’s one she saw earlier at her place. 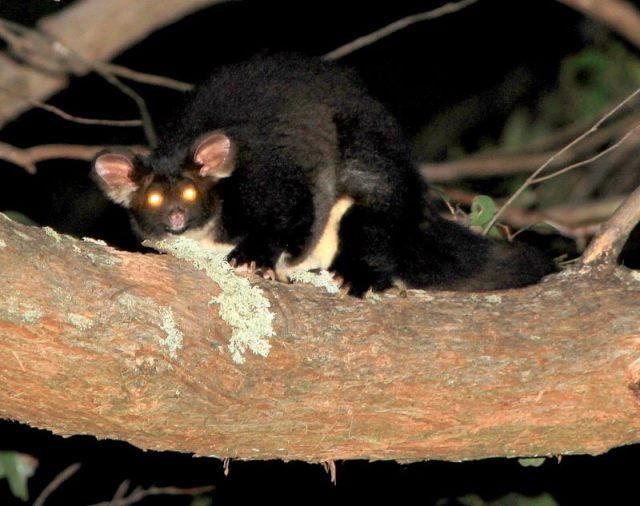 They are listed as vulnerable. I list them as cute and furry, too.

From Prue’s balcony on a clear day, you can see the Sydney skyline.

Sydney at a distance

It’s a completely different vista to when I lived in the very centre of that city. Thanks to Prue for her hospitality.

5 Responses to A tree of cultural significance