After a couple of days in Oslo, we flew to Longyearbyen in Svalbard (aka Spitsbergen, the island of pointy mountains, halfway between the north of Norway and Greenland) via Tromso, but I will leave talk of Longyearbyen, Tromso, Bergen and Balestrand – the last three being towns on the Norway mainland we made a flying visit to – for another post. The plane provided tantalising glimpses of snow-covered mountains and glaciers. I’ve seen glaciers and fjords in New Zealand, but these were something else. 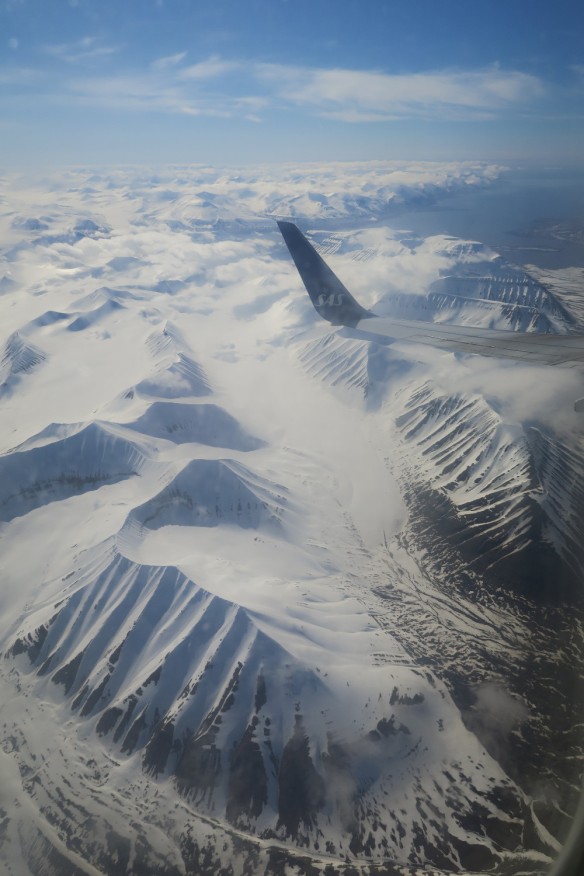 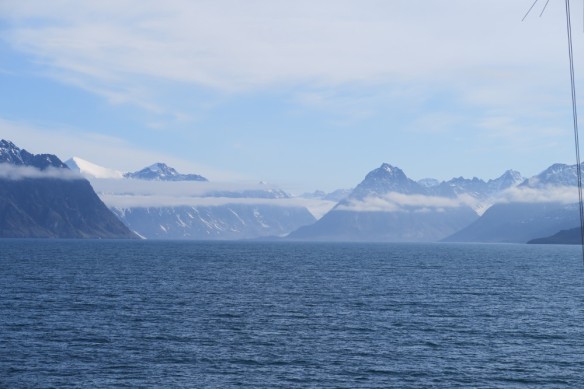 From Longyearbyen, we set out on the good ship Akademic Sergey Vavilov, a Russian scientific research vessel hired each year by Canadian company One Ocean Expeditions for occasional wildlife cruises in the Arctic and Antarctic. The Canadian/US/British etc. staff were all experienced naturalists/photographers/explorers and the whole operation was very organised, smooth and flexible. For instance, they were happy to incorporate plants in the landings once they found out 14 of the group were interested in them. (Russian sailors manned the functions of getting the ship around. Unfortunately I didn’t speak Russian and they didn’t speak English, and they kept to themselves pretty much anyway.) 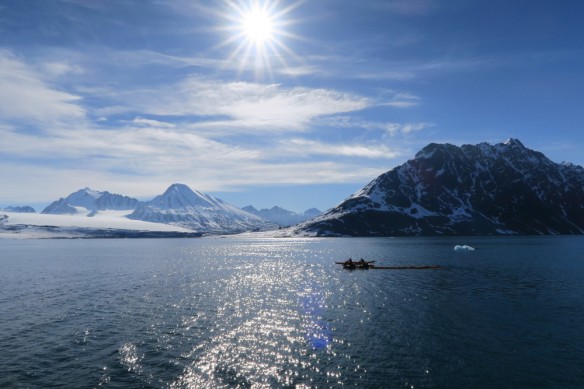 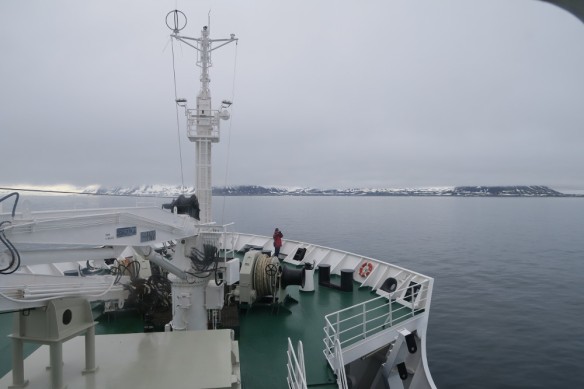 I shared a comfortable 3rd-deck room with historian Janet – thanks for the bottom bunk, Janet! The shared bathrooms were just across the hallway, so convenient for visits at any hour of the day or day (no night at this latitude and time of year) as jetlag decreed.

The weather was perfect almost every day – bright sunshine with clear, dry air and calm seas. Hooray – I didn’t need my seasickness tablets after all. Only on a couple of days was it overcast with slight showers.

The daily routine was as follows. The proposed schedule was pinned on various walls pre-breakfast. What actually happened depended on events during the day. For instance, the day we saw the polar bear, who hung around the ship for a couple of hours watching us watching her, the afternoon schedule went out the window. 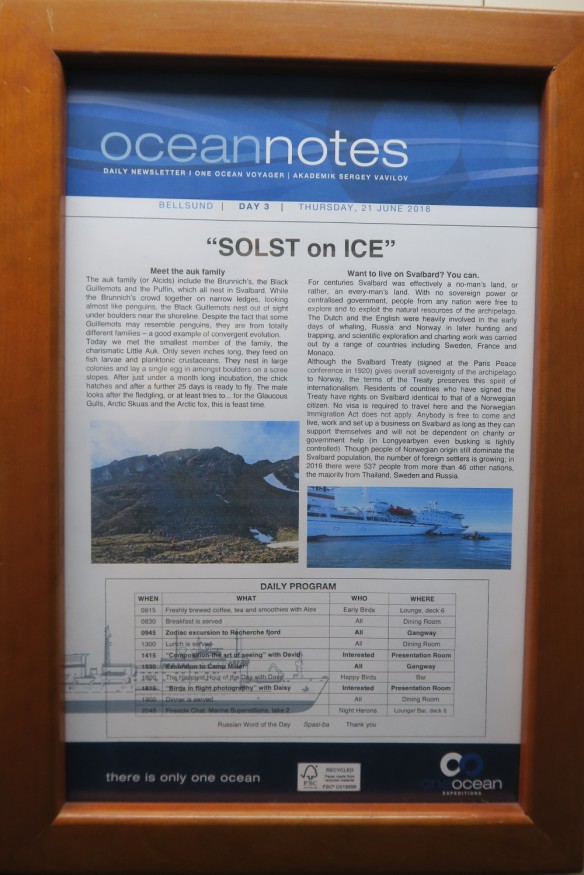 The ship’s position was displayed daily

Various posters of information on the animals, plants and ice had been stuck on the walls. The bar on the top deck had a folder of scientific articles on the effects of climate change and the natural history of animals and birds in the Arctic. There was also a Canadian Geographic issue on the finding of Franklin’s sunken ship, Erebus, in 2014,  in which the Vavilov had played a part. The other end of deck 5 had a substantial library of books on both the Arctic and Antarctic, and was the site for kayaker briefings.

Boris (the events coordinator, a Canadian despite the name) would announced events over the PA system: when the dining room was open for meals (all delicious), when we needed to gear up in the Mud Room for the zodiac cruises and landings, or if something special was seen outside (naturalist Dick and others kept an eye out from the bridge) so that we could sprint up to top (6th – oh those steep stairs!) deck with our binoculars and cameras. The trip was a ‘photography symposium’, so there were many entertaining talks  on how to get the best out of cameras, how to compose shots, etc. Watercolour artist David McEown gave workshops on sketching and painting, and there were other videos (like polar photographer Daisy Gilardini on skiing to the North Pole and Jaime Sharp on kayaking around Svalbard; check out Daisy’s website for her exceptional photographs, David’s for his watercolours, and Jaime’s for his upcoming documentary, Paddling the Cold Edge).

Gearing up in the Mud Room; photo by Anne MacKenzie 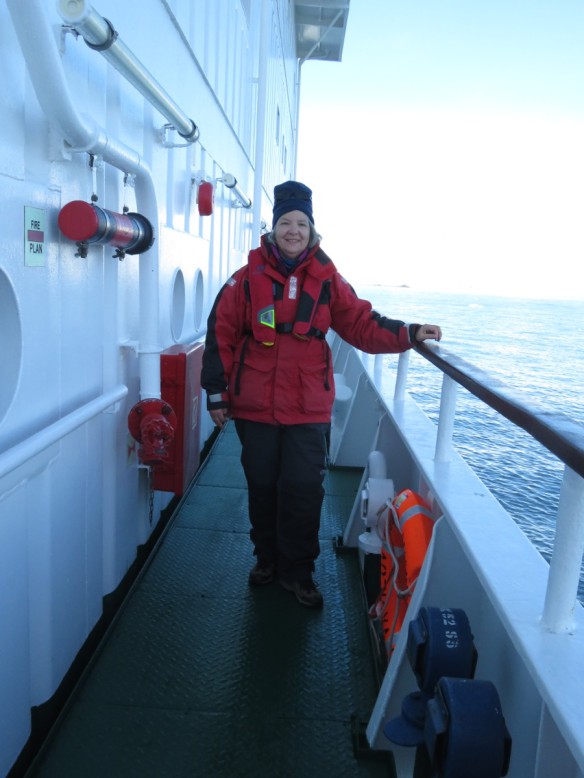 Survival gear was mandatory on the zodiacs; photo by Janet Spillman

I’m smiling under all that; photo by Anne MacKenzie

Morning zodiac cruises involved getting into survival gear – our own thermals and top layers, followed by the loaned bib-and-braces, heavy-duty outer jacket and wellies. The air temperature was commonly 2-4C and water temperature 3C, but you wouldn’t want to fall in. The kayakers had special gear for their paddling.

Zodiacs were lowered and raised by crane

Loading people onto a zodiac using the sailor’s grip

We were ably assisted to and from – with max. OH&S – the ship into the zodiacs and taken to a spot of interest – glacier, bird colony, walrus colony or whatever was around.

Afternoons were devoted to landings. Staffers were sent out prior to ‘clear’ the landings. If they were unsuitable – e.g. there was a polar bear or the shore landing was too rough – the landing would be cancelled and a ship-board activity substituted. If the landing was approved, it was on again with the gear.

On shore landings, the 87 ‘guests’ divided themselves into teams, each of which had a wildlife expert and a wildlife expert-with-rifle. The rifle is the last option for use against polar bears. I was told that the sequence of events if a polar bear spots you and comes close is as follows: (1) talking quietly but audibly to the bear; (2) yelling at the bear; (3) firing off a flare gun; (4) shooting the rifle in the air; (5) lethally shooting the polar bear. The bear will usually take off at (2) and no one likes option (5) – it is tantamount to killing a human being and also involves a lot of paperwork and legal investigation.

Our teams were the ‘chargers’ (those who wanted to walk fast); the photographers; the birders; and the plant group (this was my chosen group as I didn’t want to go as fast as the other groups, plus I was interested in the plants). Jerry compiled a list each time, and we eventually saw nearly 20% of the known Arctic flora. This was pretty good for nine afternoons’ work. 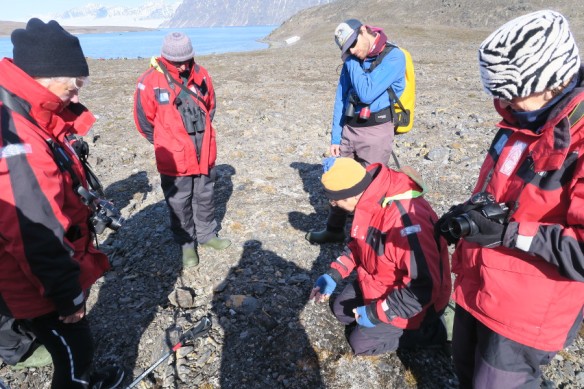 Jerry botanising; Mark in the blue shirt has the flare gun and rifle 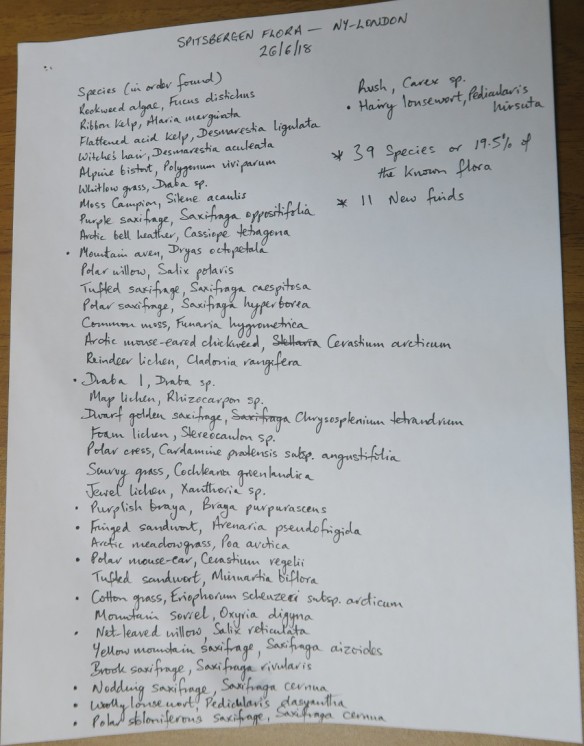 Jerry’s final cumulative plant species list; ‘new finds’ means not seen before on any of our other field trips

After dinner, there were ‘fireside talks’ on various aspects of where we were: its history and wildlife. It was a full schedule and I at least collapsed tired and satisfied at the end of each day.

Next time I’ll talk about the animals we saw.

11 thoughts on “In the Arctic circle”