I met fellow-Aussies Bruce and Linda on the Arctic trip, and Bruce has kindly allowed me to post some of his great shots. He has a camera with a big lens (allowing for nice close-ups) and the knowledge to use it, unlike me and my little point-and-shoot (yes, I know, RTFM). (All photos copyright by Bruce Moore – thanks, Bruce!) 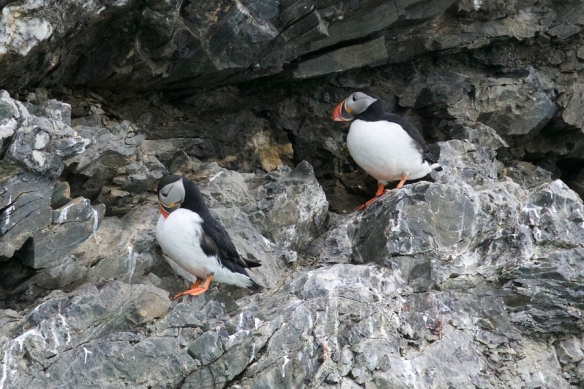 One of three puffin species, the Atlantic puffin (Fratercula arctica) has been estimated to have 10,000 breeding pairs in the islands of Svalbard. I first saw this bird on the way to the Orkneys, north of Scotland. They nest sociably in crevices or in the spaces under convenient boulders in the Arctic where there is little soil depth (otherwise they would burrow into the ground). The chicks stay hidden and are fed fish, crustaceans and worms accumulated by the diving adults.

Glaucus gulls (Larus hyperboreus) are omnivorous, eating molluscs, the eggs and chicks of other seabirds. They are the second-largest gulls in the world. 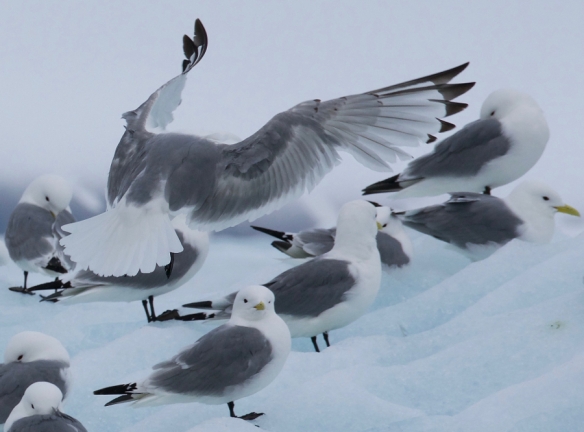 Rissa tridactyla is a colonial nester, even on glacier edges or snowbanks if there are no ice-free ledges. They build nests on very steep slopes as protection from Arctic foxes, which steal their eggs and chicks. They generally forage far out to sea, following trawlers, collecting shrimps, marine snails and terrestrial invertebrates and plants, seeds and grasses. 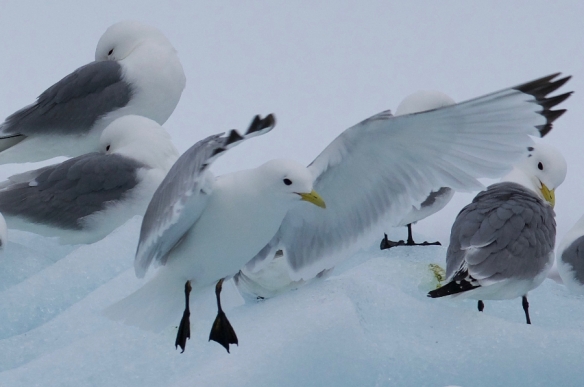 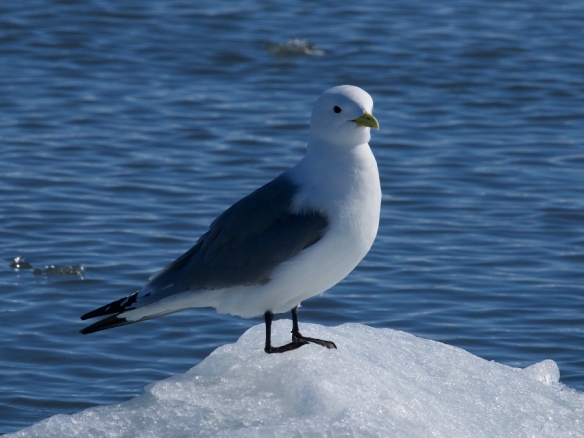 Common eiders (Somateria mollissima) are divers – the males black-and white and the females brown. They nest on ice-free islands, pulling down from their own breasts to line the nest. They eat crustaceans and molluscs.

There are a few large breeding colonies of Uria lomvia on exposed cliffs, each containing perhaps over a million birds. These are the birds you might have seen on a David Attenborough program – the chicks launch themselves (with their father) from the high cliffs even though they are unable to fly. If the chick hits the ground, it struggles through the scree towards the sea, but may be taken by Arctic foxes or great skuas. If it hits or makes it to the water, it and its father will swim south to warmer climes. The father is also flightless at this time as he is moulting.

Branta leucopsis breeds exclusively in the Arctic on low-lying islands and sea-cliff edges. They graze on vegetation. This is the bird that was thought, in medieval times, to come from a barnacle. It was thus classified as a sea animal, so that it could be eaten by Catholics on Fridays (when meat was not allowed). 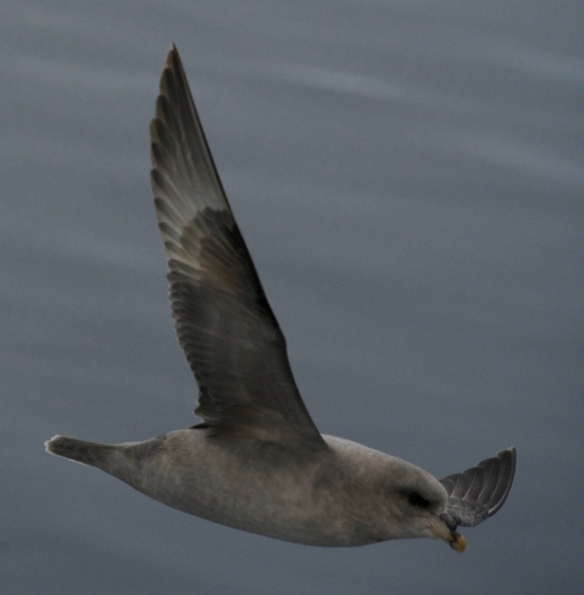 Svalbard has the ‘blue’ form of Fulmarus glacialis – the other form has more white. They happily follow ships in case any offerings get thrown over the side. They are not great on land but are strong fliers –  wingspan is over a metre – and they have been known to live around 30 years.

Sterna paradisaea migrates between the north and south pole areas, spending the summer months at each pole in turn. They travel 90,000 km every year for about 30 years – the biggest bird migration known. They vigorously defend their nests so expect to be dive-bombed if you go near one – but you wouldn’t, would you? 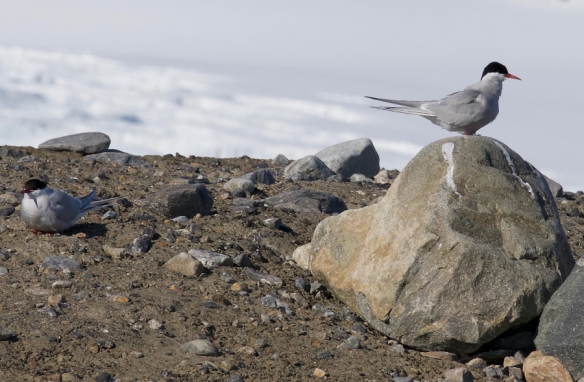 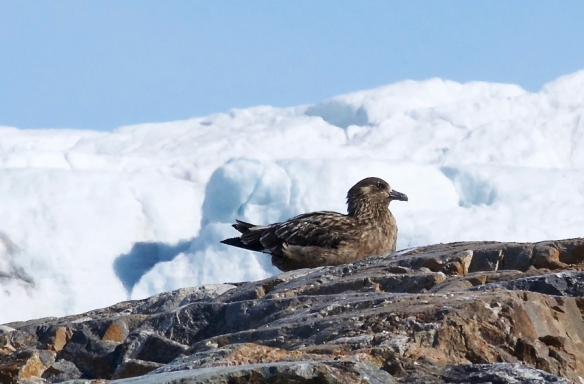 Great skuas (Stercorarius skua) aggressively attack other birds on the wing, forcing them to regurgitate their food, which the skuas snatch for themselves. Like terns, they will aggressively defend their nest from intruders, whether human or fox or polar bear.

These little cuties (Alle alle) are estimated to have over 10 million breeding pairs in Svalbard. The noise and great swirling flight they create in their massive breeding colonies when an Arctic fox is about has to be seen to be believed. They are thought to be the world’s most numerous seabird. The breeding season coincides with the seasonal peak of plankton and small fish, taken at night, mostly fairly close to the colony. 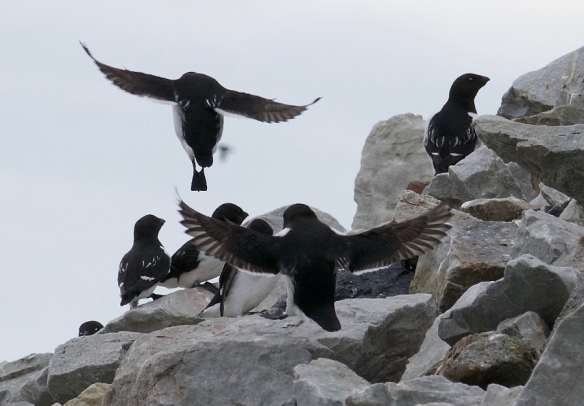 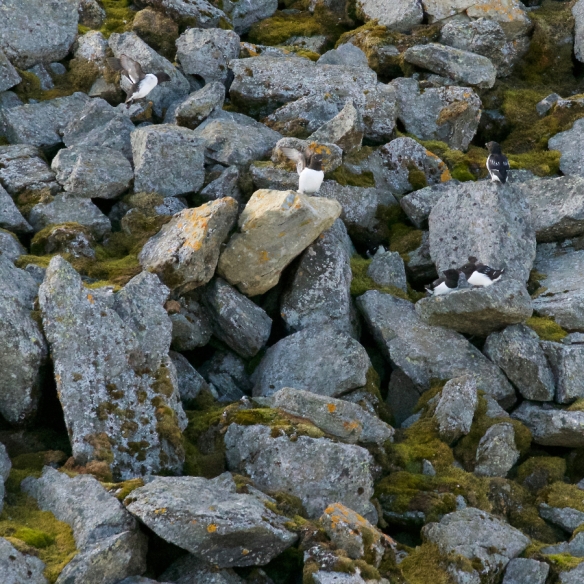 I’m not sure why Calidris maritima are ‘purple’, but they acted as any wader does, rummaging for invertebrates, insects, buds and seeds along the shoreline. 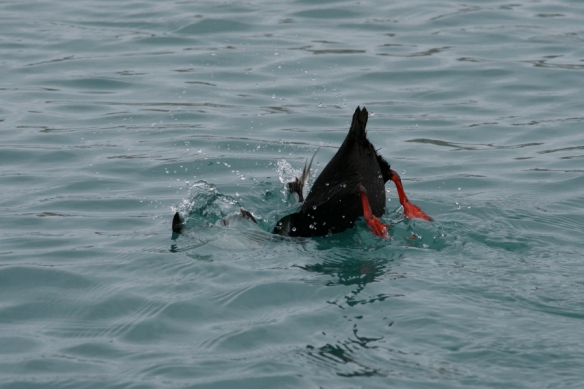 Cepphus grylle is a diver, going down about nine metres to get fish, crustaceans and molluscs. The breeding colonies are minute compared to some other birds – a few birds, or a few dozen, in scree or on flat ground. 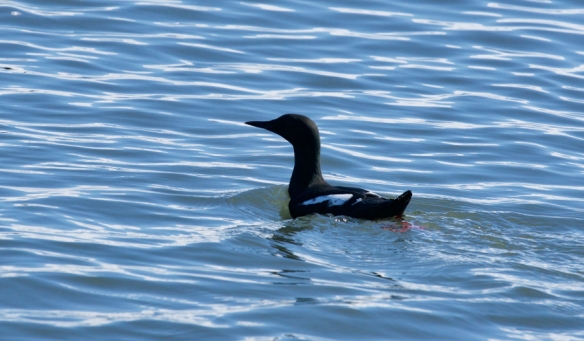 Plectrophenax nivalis is the only breeding songbird in Svalbard. It’s about the size of a sparrow and hunts for seeds and insects.