There are two types of polar paws on Svalbard: those of the arctic fox and the polar bear.

I find bears interesting, possibly because we don’t have any in Australia (no, a koala is not a bear),  so I can’t get up close and personal with one to see it where it lives. Not that that’s advisable – years ago I was visiting the fabulous Yosemite National Park in the United States with an American friend, and naively expressed a wish to see a bear (along with other non-Australian animals, like deer, squirrels, beavers …).  She said, “No, you really don’t!” and proceeded to tell me why (the most compelling reason being that we didn’t want to be bear lunch and that was a distinct possibility if we saw one – or it saw us).

I’d seen a few bears in zoos (sun, grizzly, polar), but it’s far better to see them in the wild (safely, for both bears and humans) as an animal cannot really be understood when it’s separated from its native landscape. When I at last saw a real, live polar bear in its homeland of the Arctic, this was forcefully impressed on me. Despite the harshness of its Arctic lifestyle, the polar bear looked so comfortable, so right in its place, limber and full of grace and power. This young female bear was doing what all bears do – wandering the sea ice in search of live seals, or, on land, washed-up whale coprses on the shore. (When our chance encounter with a polar bear happened, my camera decided to spit the dummy, but Bruce Moore has kindly allowed me to show his photos.) 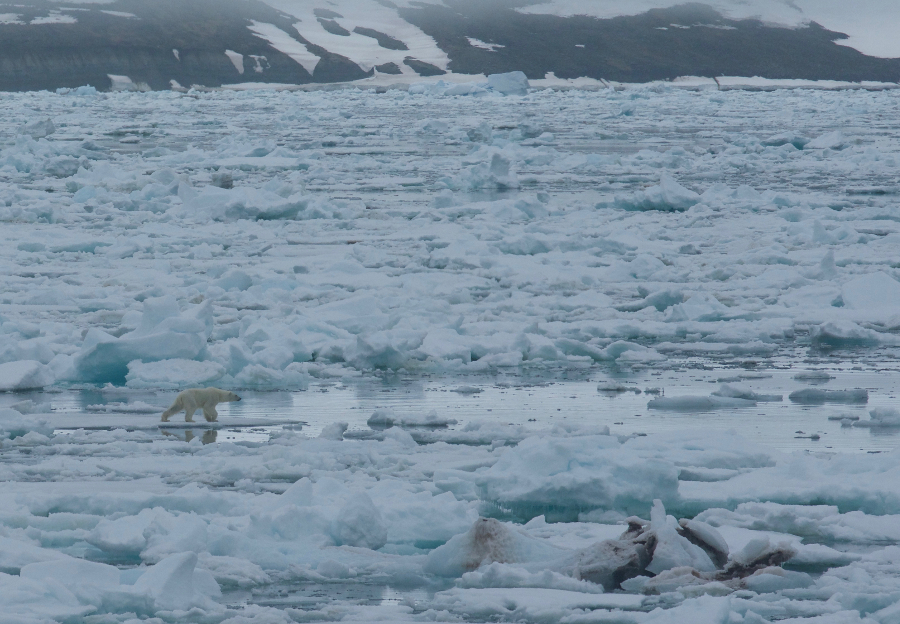 Polar bears endlessly patrol the ice in search of food, even in the harsh conditions of very sub-zero temperatures, winter storms and 24-hour darkness.

Although they are excellent swimmers. they keep out of the water when they can, to avoid getting too cold.

Even in the harshest of winter storms, only the females with cubs will be comfy in a deep den – the others have to dig a spot to lie in and settle down to let storms rage over them, and they have to roam to find food whatever the weather. They need about one ringed seal a week to keep in condition. Mothers with cubs hibernate through winter and use their own body fat reserves so they don’t have to hunt through the four or five months of harshest part of the year. They are very hungry when they come out of the den. 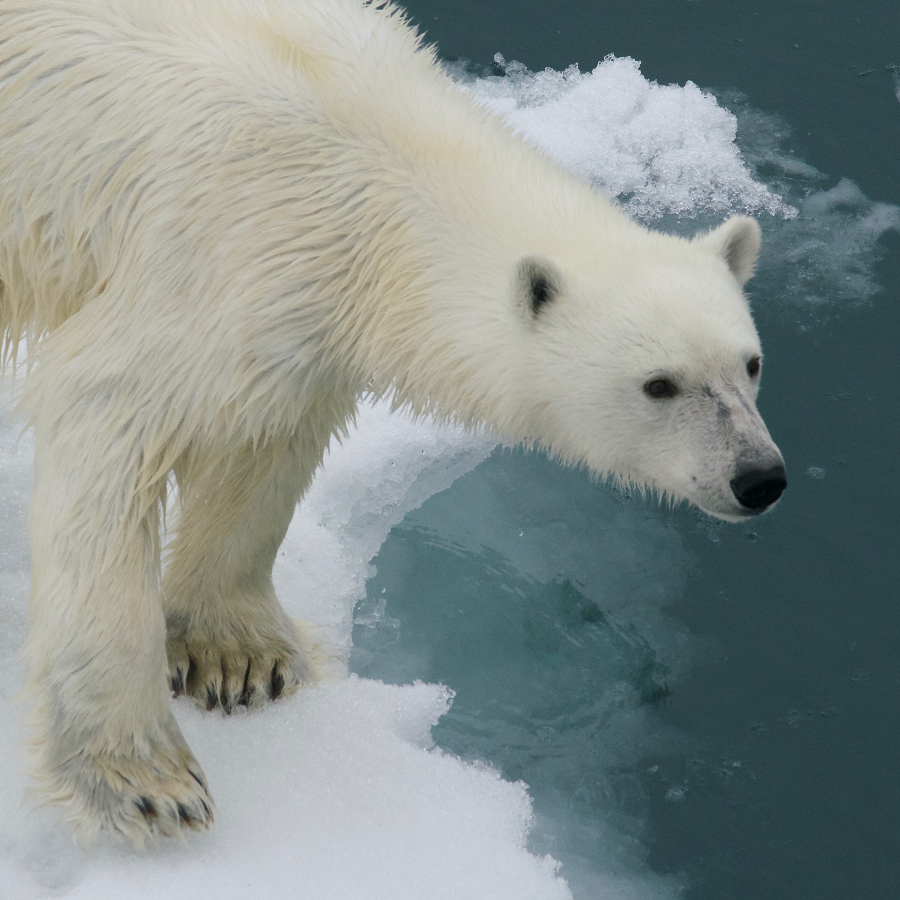 Intelligent, aware and adapted to its environment …

Polar bears are actually classified as marine mammals, because they spend most of their lives in (they are very good swimmers) or on water (in its ice form). 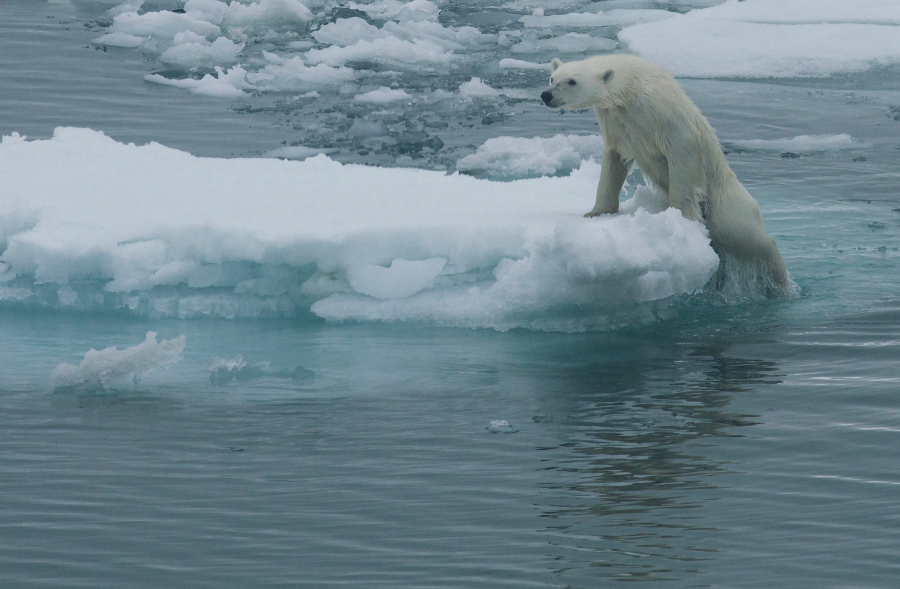 After she missed catching the seal, she turned her attention to the big ship nearby.

Cold is not really a problem for them as they have a thick layer of blubber and black skin that absorbs the sun’s warmth. The fur, too, is specialised – it’s actually transparent so that sunlight can penetrate to the skin for warmth, and had two layers so that air is trapped for insulation. It looks white (actually a cream colour), the perfect camouflage, because of the way light is reflected off it. 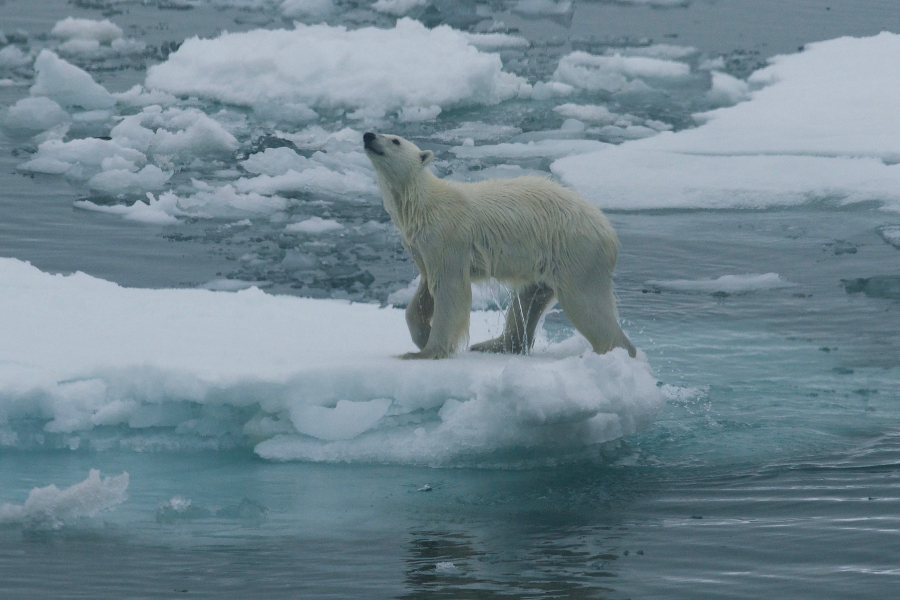 Polar bears have an excellent sense of smell – they can detect prey up to a kilometre away. They can also detect a seal in the water beneath a metre of ice and compacted snow. They have a kind of home territory but don’t defend it as such – the timing and place of appearance of food is so variable that there’s no point. They mostly wander on their own but can be more sociable when there’s plenty of food about.

“Our” bear saw a seal in the distance resting on a floe, and sneaked her way via ice and water so very, very close. At the last minute she charged, but the seal was faster and dived into the water. Polar bears are good learners, so she would have stored that experience away for next time. After she got out of the water, she spent several minutes rolling on the ice to dry off her fur, so that she wouldn’t get too cold (air between the hairs is a much better insulator than water). Cuteness overload ensued!

After hanging around the ship for about half an hour, she finally decided she was on a hiding to nothing, so strolled off. It was such a privilege to have that encounter.

This entry was posted in Animals on land, Travels and tagged Arctic, polar bears, Ursus maritimus. Bookmark the permalink.