The sound of breath freezing

The sound of breath freezing is very much outside my experience. I’ve lived most of my life on the driest continent on Earth and some parts of it are very hot, so the concept intrigues me.  I first read about it in one of the many books I’ve been devouring on the polar regions. For the breath to freeze, the air temperature has to be much lower than I’ve experienced (which was pretty much 2ºC all day and ‘night’ in the 24-hour-light Arctic summer, and minus a couple of degrees in rare frosts at home). The lowest temperature recorded in Australia (not counting our bit of Antarctica) was -23C (-9.4F) in the Snowy Mountains in 1974.

Apparently the indigenous people of Eastern Siberia have the lovely phrase, ‘the whisper of the stars‘.

When the temperature drops below the mid-minus 50s Celsius, a soft whooshing sound can sometimes be heard, like rice or grain being poured. This noise is caused by the moisture in one’s own exhaled breath turning to ice crystals in the cold dry air.

The Weather Doctor, reporting on temperatures of -64C (-83F) in Canada, gives another description:

The freezing of one’s breath produced a continuous hissing sound similar to dry blowing snow, and a tinkle when the ice crystals hit the ground.

I cannot imagine what -50C would be like, let alone -64C, but there are plenty of people who choose to live in that world.

Ice cliff at the edge of a glacier, Svalbard. It will calve off one day with an almighty boom and wave.

Seeing so much ice and so many glaciers in Svalbard was hard to get my head around – I kept pinching myself to confirm I wasn’t dreaming. Sipping drinks in the comfortable bar of the ship, I could hear the popping of the ice cubes in the drink, taken from small floating chunks of ice  – that released air was very likely to be thousands of years old.

Of course, looking at photos is nothing like actually being there – you’re missing on out on the feel of very cold air in your nose and on your skin, the sounds (the screaming birds, the gentle hum and vibration of the ship and the waves lapping against the bow if we were moving, and the marvellous, deep silence underneath all that), movement, peripheral sights, smells (oh, how clean that air smelt!) – but the beauty cried out to be captured.

Before the trip, I thought of glaciers as pristine, white and glowing, but the reality can be very different. 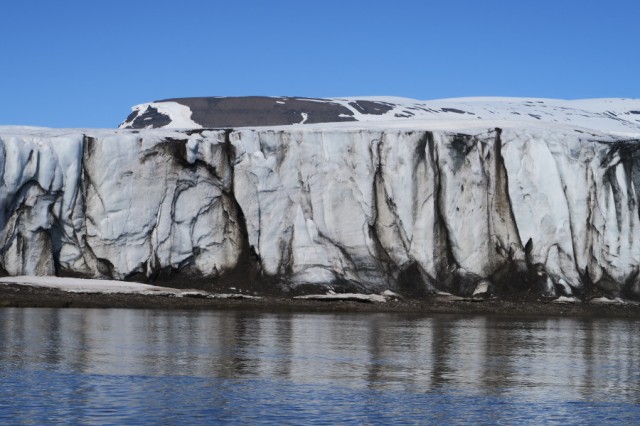 The different colours indicate the contents of the ice. The brown is dirt that has been transported down with the glacier, scraped off the rock it has scoured over thousands of years. Clear ice has been compressed over thousand of years, squeezing out any air bubbles that would reflect light. White ice is the result of a top layer of snow, reflecting all colours of light so that we see white. Different shades of blue show the amount of impurities inside. Green indicates algal growth. 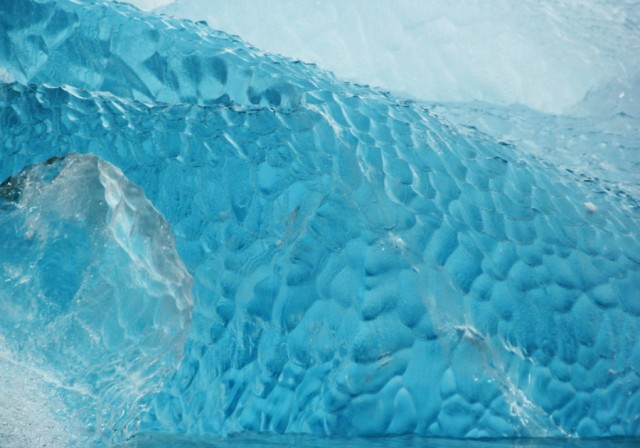 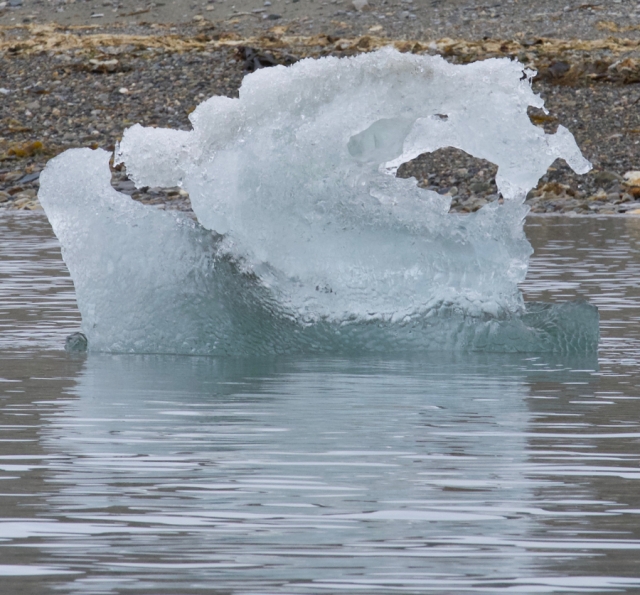 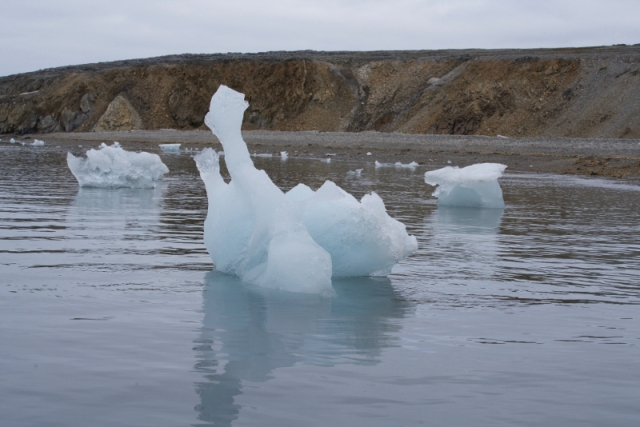 There’s a bunch of descriptive words in English for different forms of ice. Here’s how Jill Fredston puts it in her book Rowing to Latitude: Journeys along the Arctic’s Edge:

Saltwater begins to freeze at just over 28ºF [-2ºC]. It progresses from a stew of individual crystals to thicker slush, to a bendable layer that, when it thickens and whitens, is called first-year ice. Any ice that survives a summer of melt, in the process becoming bluer, denser, and less salty, is known as multiyear ice. Typically, this ice thickens to ten or twelve feet. More generally, any sea ice not fixed to the land is termed pack ice.  … Pieces of pack ice, called pans or floes, move in response to wind … In contrast, glacier icebergs … are driven primarily by current.

Bergy bits are floaters smaller than icebergs, and growlers are smaller than bergy bits. The terms go on and on.

Brash ice (small pieces broken down from larger chunks) on the left. Note the clean cut-off line on the right, probably because the sea temperature is higher there.

The various forms of sea ice are important for a number of animals. Seals haul out on it to rest and warm up between feeds, and polar bears rely on them (mainly ringed seals) for food. After hibernation in winter, bear continually roam the ice in search of whatever they can find – whale carcasses, sea birds, seals hauling out, people … 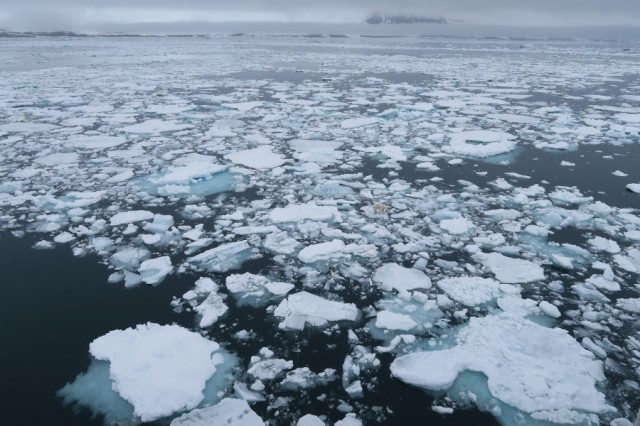 The questing bear is the cream bit in the middle.

This bear went after a bearded seal, but ringed seals are much easier to catch.

Bearded seal hauled out on ice 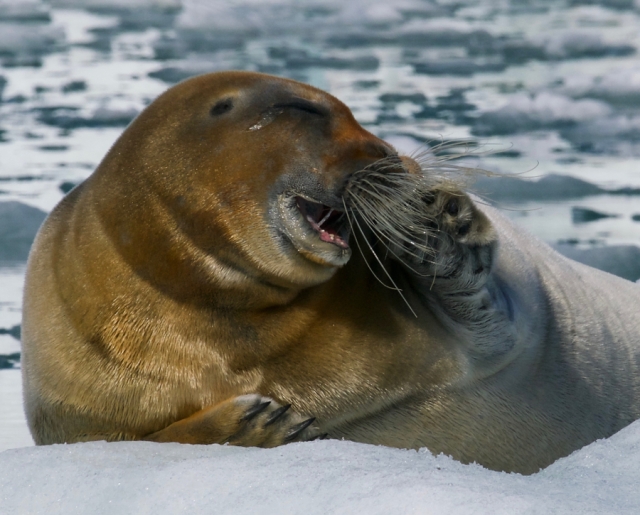 I’ve been reading up on ice, the properties of ice, its nature and its relationship to living things. It’s been studied extensively for several hundred years by both explorers or scientists, as well as thousands of years by indigenous people who must know it intimately to survive. I won’t bore you with stuff you can easily look up but I’ve been struck by one thing (well, many things, but this intrigued me).

It was once thought that not much lived under the ice (except fish and the things that ate them and that they ate), but that turns out to be very wrong. As divers and ROVs go down, they are finding more and more strange and wonderful creatures, such as shown here in Antarctica.

Not only do algae live on the undersurface of ice, but also small patches of bottom life. Barry Lopez tells how this can happen in his wonderful sequel to his wonderful Arctic Dreams,  called Horizon:

… in some spots a weak bottom current might eddy around a cluster of benthic creatures, rocks, and bottom sediments and come to a complete halt in some crevice or notch. Here, a few molecules of seawater might freeze. Over time this initially smaller platelet of frozen freshwater might expand (as seawater crystallizes into platelets, it squeezes out the sea salts that keep seawater from freezing at 32ºF), creating a growing matrix of freshwater ice crystals. (The specific gravity of freshwater allows crystals of it to float in seawater.) At some point the expanding mass of freshwater ice becomes large enough to exert an upward force sufficient to uproot a section of the bottom. This scrap of the benthic community continue to float upward until it lodges on the underside of the sea ice cover.

One day I almost swam straight into a dark basalt cobble floating in the water column in front of me. I assumed it was encased in freshwater ice, but I could find no angle of observation that made this apparent. Had I not learned what can happen in these very cold waters, I would have had to conclude that here in Antarctica, dens rocks float.

We have so very much to learn.

This entry was posted in The sea, Travels and tagged Arctic, Arctic Circle, glaciers, ice, iceberg, Svalbard. Bookmark the permalink.

5 Responses to The sound of breath freezing