It’s the time of year when birds go a’courting. I noticed a female satin bowerbird (Ptilonorhynchus violaceus), and then a male, in the backyard this morning. I’d never seen the two of them together so was interested to watch their interaction. (The photos are not super-sharp as they were shot through my kitchen window, which the spiders are very pleased I don’t clean much.)

The female was hopping and pecking around on the ground, possibly looking for insects or fallen mulberry fruit. The male flew in and looked at her. She noticed him and continued pecking for food. He followed her at a distance. She flew up into a tree, so did he. Then I lost sight of both of them. 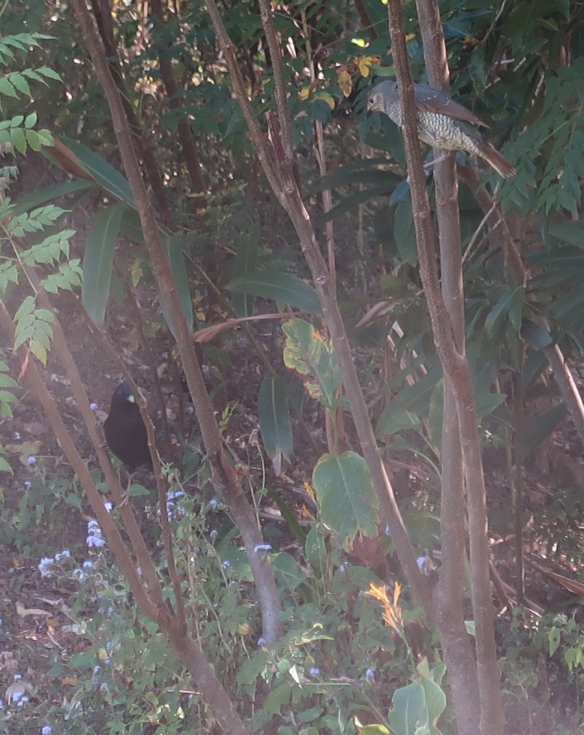 We’ve had a male satin bowerbird as long as we’ve lived here, but it’s impossible to say whether it’s been the same bird all the time. Males that have been banded seem to average eight or nine years, but have been known to go to 26 years.

Males don’t mature until they are seven or eight years old, which means, if their average age is correct, they don’t get many breeding seasons in. They initially look like the females, then start changing colour to the adult, shimmering, dark blue plumage at around five years of age. Females mature between two and three years.

A male will build a bower and decorate it with blue objects on the ground. It’s a ‘theatre’ designed to attract and impress a female well enough to mate. He displays to her by dancing and vocalising in and around the bower. If she is impressd, she will mate with him and, then go off and build a stick nest high in a eucalypt or acacia tree, usually laying two eggs. The male goes back to attracting and displaying to other females. There is a terrific YouTube video of the display here.

My bird’s bower has been in the same place for years, so I went down to see if it was still there – it has been repaired from earlier when only one ‘side’ existed. No birds were in sight, so I took some shots.

The ripped-up blue material seems to be from a thick plastic bag; there were also blue fruit juice bottletops and a yellow biro with a blue top. I’m not sure where all this came from as I don’t recognise anything from my kitchen.

My neighbours have seen regent bowerbirds, but I never have. I’m happy enough with satins.

2 thoughts on “A bower for the lady”