Halloween is not really a thing in Australia, although as a commercial event and fun for the kids, it’s growing here. A few years ago, I had a great Halloween in San Francisco – they really get into it in the USA. Sales assistants were dressed as witches and pumpkins and in other imaginative costumes. A bank teller had a lot of big purple balls on her costume – turns out she was a bunch of grapes!

If you think of it (as I do) as the pre-Christian Celtic harvest festival Samhain, it marks the end of harvest and the beginning of the darker (winter) half of the year. The souls of the dead are thought to visit their old homes and families, hence a somewhat spooky bent with ghosts and ghoulies supposed to abound. It was helpful that, on that visit to the States, I was spending time with a group of friendly neo-pagans, who were able to explain some of the more arcane aspects that the general public were probably not aware of.

In the Western Christian tradition, 31 October is All Hallow’s Eve, the evening before the observance of Allhallowtide, when the dead (saints and ordinary people) are remembered. There is disagreement among academics (of course there is!) over whether the Christians supplanted the pagan tradition. Whatever the reason, it is popular in many countries.

As a seasonal festival, it doesn’t really work in the Southern Hemisphere since the seasons are reversed, but the spooky is often attractive at any time. Horror movies, zombies and body horror can give some people an exciting frisson of fear, in a good way. (Doesn’t work for me, but it takes all kinds.)

All this is a roundabout way of introducing my next beastie, an example of body horror if ever there was one.

The sally wattle (Acacia salicina) near my house finally fell over last week. I’d been reluctant to cut it down as a squirrel glider had been supping on the sap for quite a while (we could hear its distinctive yapping at night), and various birds had been using it as a perch. But a storm finally knocked it over and revealed something like this in the crack. I didn’t get a photo of my actual ‘witchetty grub’ as I left it overnight, expecting to get a photo in the morning, little realising what was about to happen.

I was expecting it to turn into a moth of some kind, but in fact it is a curl grub, the larva of a scarab beetle. In the morning, a process of transformation started. The grub gradually shed its outer skin, revealing a multi-legged monstrosity, far from the cute and furry moth I was expecting. The black area (in the photo below) is the grub’s mouth, which had been busy demolishing the sally wattle over a couple of years.

The pupa continue to wriggle and little by little the outer skin was completely shucked off. 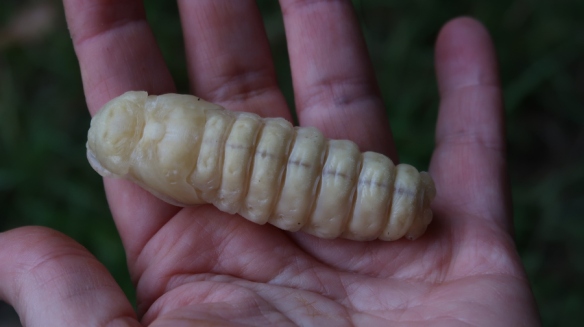 Alas, I will never know what scarab beetle it would have turned into because after a couple of weeks it stopped moving, died and started falling apart.

The transformation was the trick – the Halloween treat will be lunch for a lucky kookaburra!

Picking off the citrus bugs from the orange tree, I saw this cocoon, all dried up and with a hole in the base.

Friend Christa clued me in to the correct ID – Papilio aegus, the orchard or citrus swallowtail butterfly. Thanks, Christa!

She also sent me some photos from her own garden showing one of the instars (developmental stages) and a cocoon, in much better shape than mine, that it came from.

The instars all have slightly different colours and forms, as can be seen on the Coffs Harbour Butterfly House website.

Below is Christa’s photo of a rather worse-for-wear female in Kempsey.

According to the Brisbane’s Big Butterfly Count Facebook page:

… one of our largest, the Orchard Swallowtail. Many of you will have encountered this beauty and will easily recognise it. You can’t miss it just by its size. According to M. Braby the size varies from a wingspan of 102mm (male, below right) to 108mm (female, below left), some describe them as larger. The males are predominantly black with white markings while the female is very attractive with extensive white-greyish markings and additional red and blue ones on the hindwing.

Once emerged from the egg, the caterpillar (larva) looks like a bird dropping, brown and white in colour, with growth gradually changing through instar stages to a mostly green appearance before it changes into the pupa (chrysalis). The chrysalis colour can change too, depending on where it is positioned, presumably to blend into the surrounds.

This butterfly has many larval hosts. Home gardeners will find the caterpillars on citrus trees and the adult butterfly on many flowering garden plants. Among the native host plants for larvae are Lime berry (Micromelum minutum), native limes (Citrus australis, C. australasica), and Crow’s Ash (Flindersia australis).

Did you know that this butterfly’s larva (like that of other swallowtails) uses a red osmeterium to warn predators? Osmeteria look like a little forks and are located just behind the caterpillar’s head. They are everted when the larvae feel threatened.

Many gardeners consider the caterpillars to be pests on their citrus trees, but I’m happy to share. As Sir David Attenborough says, “I think sometimes we need to take a step back and just remember we have no greater right to be here than any other animal.”