I heard the first boobook of the season the other night, and the first cicada. The mulberry tree’s leaves are growing back, and the whipbirds are going nuts with their call-and-response mating calls. Some frogs are even calling, and soon the fireflies will be out. Methinks the season is turning.

Andrew’s sharp ears picked up rustling out front of the house yesterday afternoon and, lo and behold, there was our second sighting of an echidna (short-beaked echidna, Tachyglossus aculeatus) here in 20 years.

What do reptiles have in common with monotremes? One thing is they both lay eggs – but monotremes (echidnas and platypuses) are mammals, and that’s peculiar.

The echidna is named after the Greek mythical monster, Echidna, who was half woman and half snake. The animal was originally perceived to have both reptile and mammal characteristics.

The female lays a single egg each year, and places it in her pouch. It is soft-shelled and leathery, and will hatch into a puggle (don’t you just love that word?) in 10 days or so. It is hairless and laps milk from two areas in the pouch – no teats on an echidna. After 45-55 days, it starts developing soft spines. The mother then digs a den and puts the puggle in it, goes off to feed and returns to ‘suckle’ the baby every few days until it is weaned at about seven months. It may stay in the den up to a year.

The first photo shows lots of dig sites – the echidna was vigorously throwing dirt out of the way with its back-facing front feet, then thrusting its nose into the dirt. The nose has electrosensors in its snout to detect ants and termites. Andrew said he could hear snorting as the echidna cleared dirt from its nose.

This is a short-beaked echidna and although the snout is pretty long, the long-beaked echidna from New Guinea does have a longer beak and overall looks very different.

The dark spot in the photo below – a vertical ellipse behind the eye –  is one of the ears. Hearing is excellent. Andrew managed to quietly sneak up for close-ups, and it at first threw itself against the earth, spines up, then, when he didn’t move, went back to digging madly shortly after. 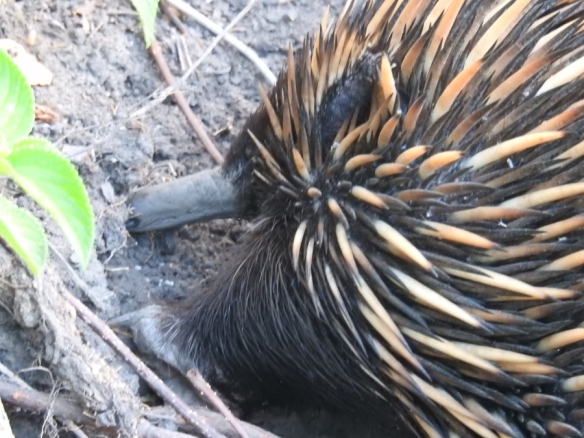 The spines are actually tough, hollow hair follicles – you can see a broken one towards the bottom front in the photo below. 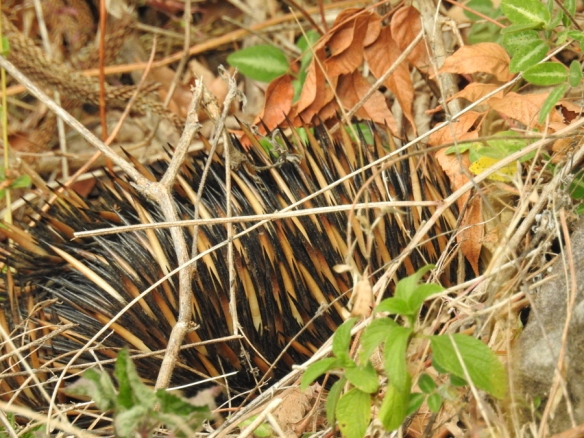 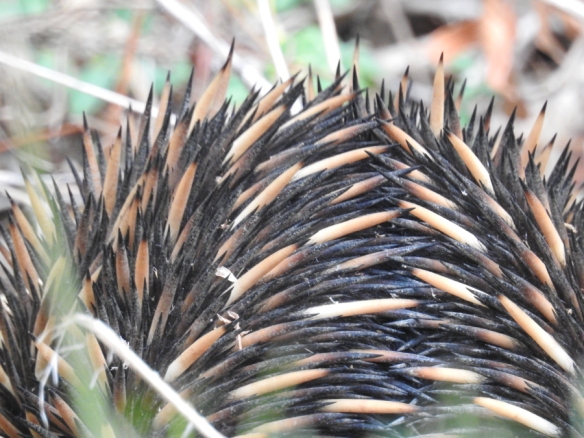 As the sun went down, we left it to its business.

Although the echidna’s spines are pretty spiky and it hunkers down to defend itself, goannas can still make short work of them. There’s an exhibit at the Queensland Museum of a mummified pair – a perentie (Australia’s largest goanna) who tried to eat an echidna, then died and was preserved in the desert conditions. The echidna is still stuck in its mouth. 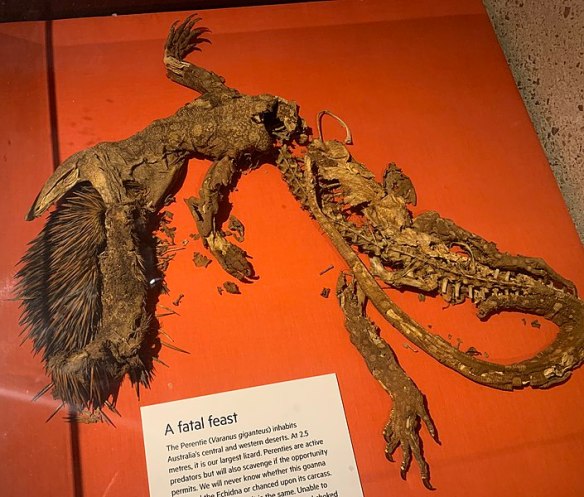 Our goanna, seen resting under the hoop pine near where the echidna was digging, is a lace monitor (Varanus varius). It’s also called the tree goanna from its habit of scooting up trees, for defence and also to check out bird nests for eggs and chicks.

This one is probably making our brush turkey nervous, too, as it will dig out and eat the eggs from the turkey’s brood mound if it gets a chance.

It is always such a delight to see these animals in the wild.