I’ve mentioned before that I’m fond of museums. Having worked in a museum early in my career (a natural history one), and now volunteering in one (a historical one), I know how much effort goes into them. I couldn’t resist going to the one in Svalbard. There’s a mining museum in Ny-Ålesund, which strictly speaking takes the title of world’s northernmost museum (at 78.92 degrees latitude), but Svalbard’s is the northernmost general museum (in Longyearbyen, 78.22 degrees latitude).

It’s modern style and well set-out, and looks like it’s had lots of money thrown at it. It covers natural history, mining history, and sealing/whaling history. That last is the main reason people first came to Svalbard after it was discovered in 1596 by the Dutch explorer William Barentz – there’s no sign of indigenous people there. Archaeology in Svalbard consists mainly of hunters’ huts and coal mining machinery. The coal mines are being phased out, with only one mine working at the moment. There’s even a failed marble quarry. Here’s an article on industrial archaeology in the polar regions if you want to get into the nitty-gritty. 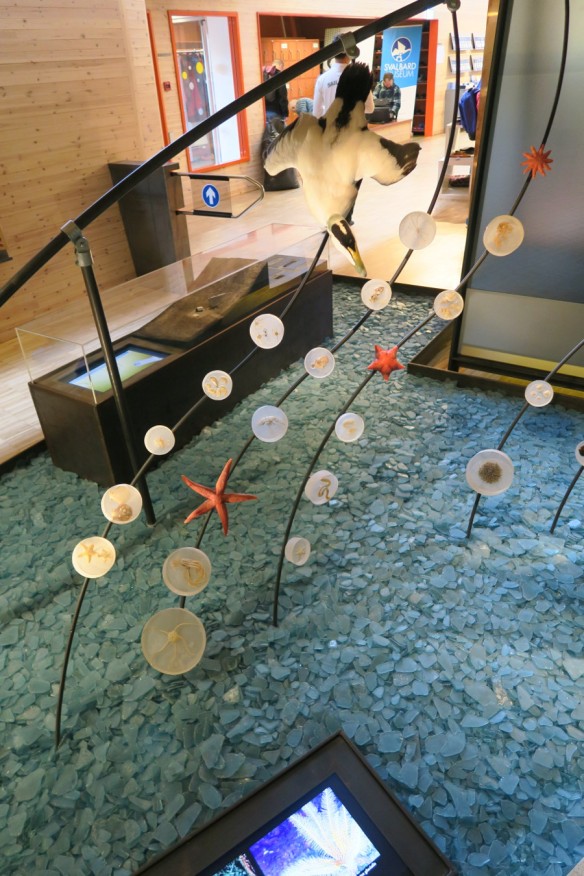 I was pleased to see exhibits on underwater life in addition to the larger, more well-known animals. In summer, upwelling currents bring tonnes of phytoplankton and zooplankton to the upper levels of the sea, creating a bonanza of food for animals who must stuff themselves silly to either survive the winter on site or migrate south. I was hoping to get a book on underwater life in the fjords, but had to wait until the Bergen aquarium to find one in English. There is a lot more life on the cold sea bottom that I imagined. 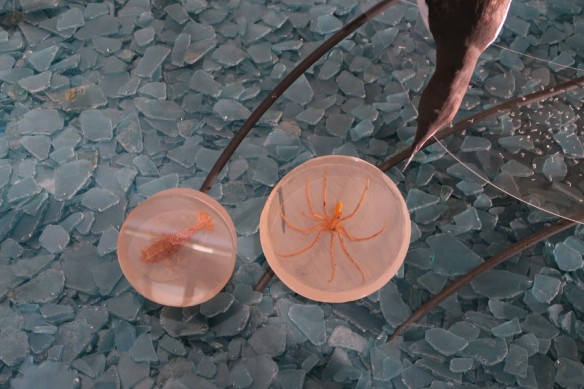 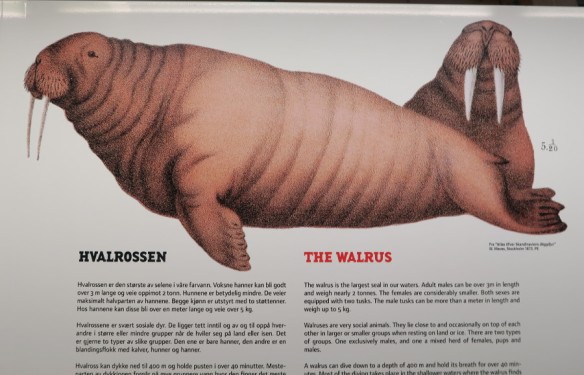 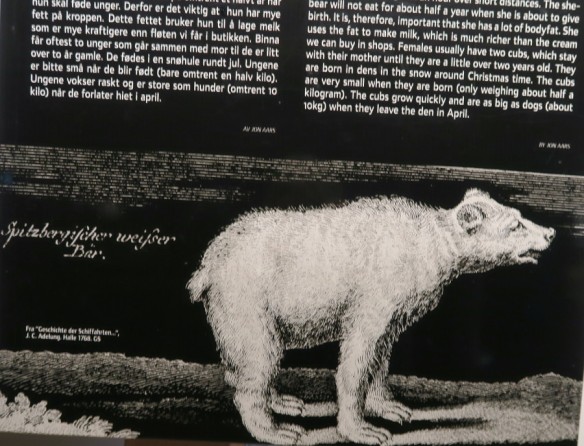 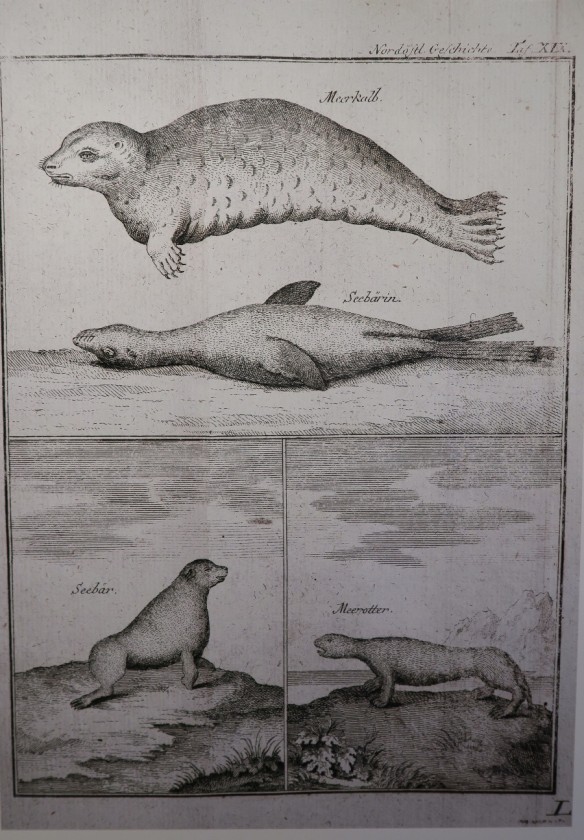 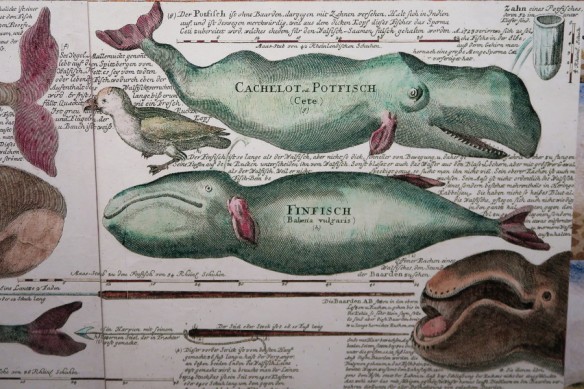 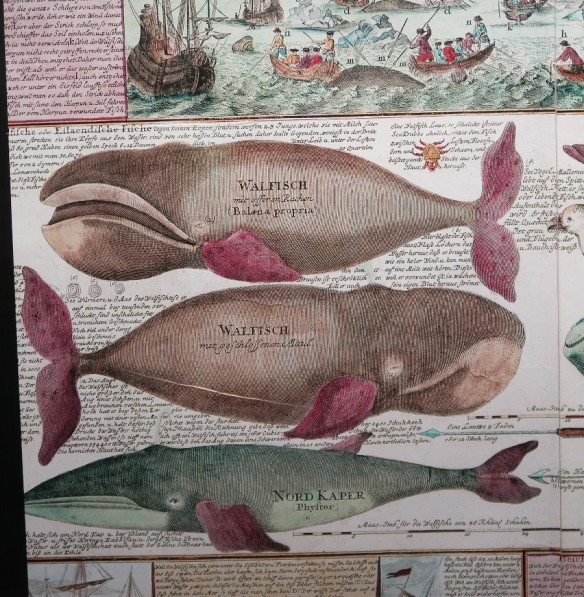 Coal mining was extremely hard work, horizontally in narrow channels carved by the miners themselves. Miners had to climb up the steep mountain slopes to enter the mine, then work long hours in poor conditions. 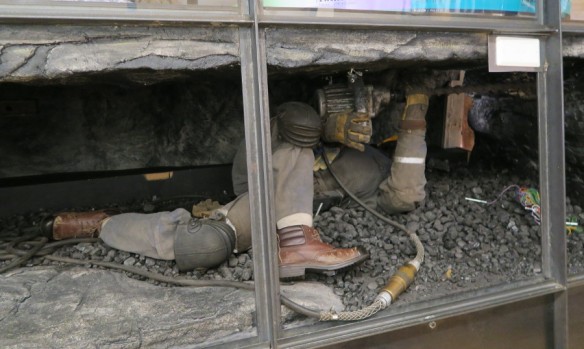 Artwork tribute to miners on the main street of Longyearbyen

‘Sykehus’ (sign on the left of the statue) means ‘hospital’

There’s only one working mine now, and the old mines have been left as they are. They’ll probably be preserved indefinitely in the cold climate where things take a long time to rot down (if they ever do). Imagine walking up to this one every day for long hours of back-breaking labour in all seasons (including -40 degrees C and blizzards). 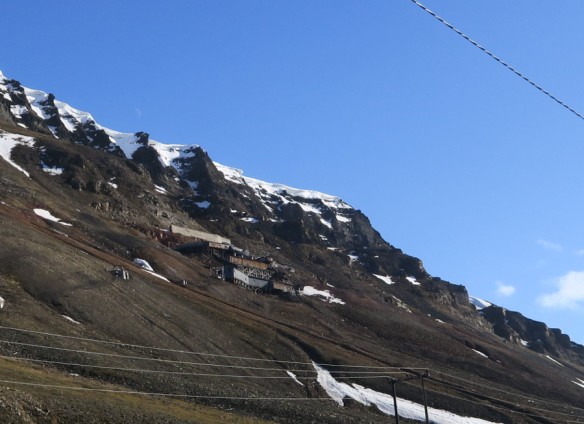 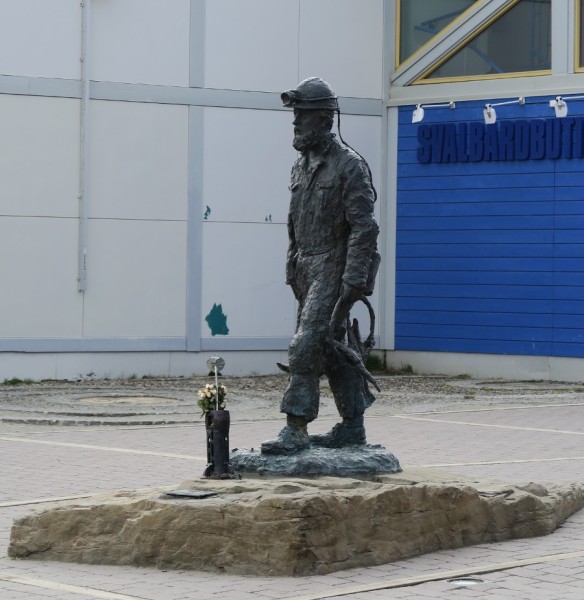 Bronze tribute to miners in the main street of Longyearbyen

Modern coalmining here is now much safer and better paid – see this article (note that it is a 2007  article, but gives an idea of modern conditions).

The photo below shows a disused mine and the graveyard below it. The white crosses mark the graves, including those of several miners (numbers vary depending on which website but seven seems to be in the majority) who died in the 1918 Spanish flu outbreak. The graveyard stopped being used in the 1950s. Bodies don’t tend to stay buried in the ground (buildings also rise up, due to the melting and re-freezing of the permafrost, unless they have special footings), and don’t decompose due to the extremely cold temperatures. In 1998, researchers exhumed some corpses to see if there was any Spanish flu virus still alive. I haven’t been able to find anything definitive on whether they found the virus. One website says traces of the virus were found in one body. Another says only skeletons were found (despite many websites saying bodies froze in the permafrost and so would be preserved). Dead bodies, and dying people, are now flown to the mainland for burial there. There’s been talk of moving the cemetery due to avalanche risk.

Old mine and graveyard

… after exhuming six of the seven bodies in Longyearbyen cemetery, Canadian medical archaeologists extracted their lung, liver, kidney, and brain tissue using a boring device for taking tree core samples. The genetic material of the 1918 flu, researchers found, was still there — bits of ribonucleic acid (RNA) fragmented in the bodies. Back in the laboratory, researchers cultured the bacteria clinging to lung tissue; still alive, they grew hardily when placed in nutrient broth and heated to body temperature.

So I’m a tad confused about what actually happened.

Alcohol restrictions are in force in Longyearbyen, as a left-over from the old mining days when there wasn’t much to do except drink, leading to fighting. Our German guide said much the same about winter and whiskey (he didn’t mention fighting, though). Residents are limited to a quota of either 24 beers or two litres of hard liquor a month, but wine purchase is unrestricted. There aren’t any taxes on alcohol, so it is quite cheap (especially compared to mainland Norway where I paid A$16 for a schooner of beer, normally A$5 at my local pub). 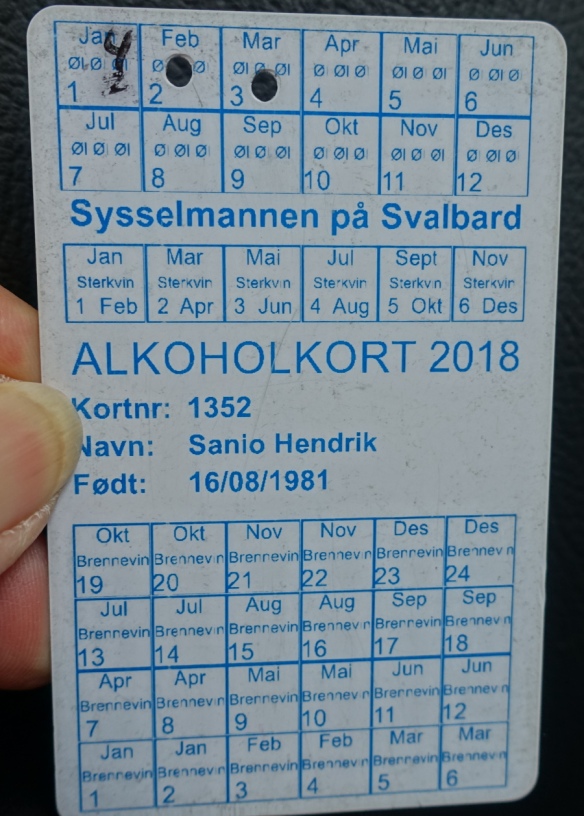 Any human artefacts (including what seems to be junk) from 1946 and before are designated cultural heritage sites and must not be disturbed. So intriguing old huts like these are definitely off limits. Look from afar but don’t touch.

It’s a shame that ugly old machinery spoils the illusion of a pristine wilderness, but removing it is probably in the ‘too hard basket’.

I suppose one could consider it an ‘open-air museum’. There are no curators here, though.