One thing I didn’t expect to see in the Arctic was marine invertebrates, but of course in the Arctic summer there is a huge upwelling of plankton via the deep ocean currents, providing literally tonnes of food for fish and baleen whales. The graphic below gives you an idea of who eats who, except it has left out Arctic foxes, which prey on birds and their eggs and scavenge what’s left of seal carcasses taken by polar bears.

I was pleasantly surprised to find myself on a zodiac with the ship’s doctor, Nanamma, who turned out to be as keen on jellyfish and similar critters as I was. She spent some time dipping ziplock plastic bags over the side and showing us what came up. I was thrilled to see organisms I had only read about – pteropods (sea angels and sea butterflies) – and comb jellies. 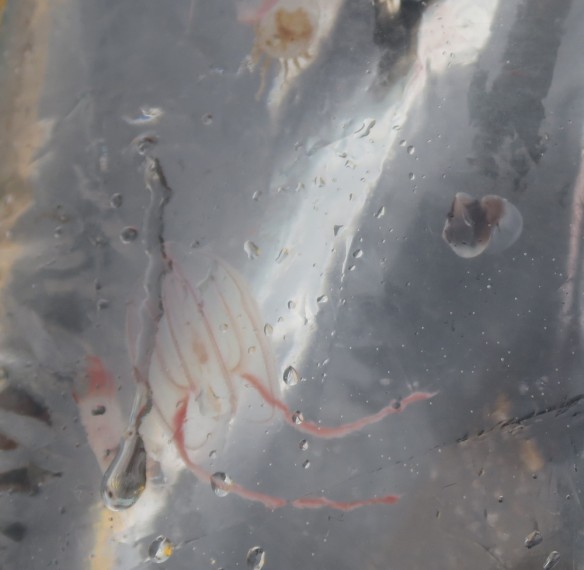 Below is a better shot of a sea butterfly, taken by NOAA.

Sea angels are particularly beautiful. They were bigger than I expected – about the length of my thumb.

Below is a clearer shot by NOAA.

Once I got my eye in, I could easily see them in the water – all over the place! Just another fabulous day in the Arctic.