At Flat Rock, the beach was very clean – smooth sand and little debris of any kind, whether plastic, seaweed or shells. The low tide was the lowest it had been for a while, so the correspondingly high high tide had reached all the way to the dunes. The rock platform itself had a lot of sand filling the shallow ponds. 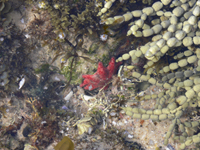 Flat Rock pool. The more plants, the greater the chance of finding something interesting

Many black sea cucumbers (Holothuria leucospilota) were hoovering the sandy bottoms of their ponds for food. They are technically known as ‘detritus feeders’ – they get any organic matter they can from between the sand grains and shell grit on the bottom. You can get general information about their lives at http://en.wikipedia.org/wiki/Sea_cucumber 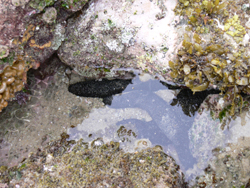 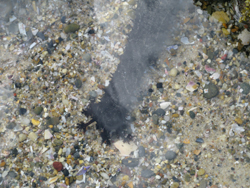 You can see the mouthparts

A small octopus (possibly Octopus tetricus, the common Sydney octopus) crouched under a rock in its lair, pretending to be a piece of seaweed with one-half of a bivalve on one tentacle waving slightly in the water. Octopuses (or octopi) feed at night on shellfish, drilling into the shells and injecting a paralysing fluid. I’ve previously see the blue-ringed octopus at Flat Rock (Hapalochlaena species), and the blue rings are indeed very beautiful, but saying ‘don’t mess with me!’ I was walking carefully in a shallow pool, and took a moment to recognise it – then a loud ‘eek!’, a leap and ‘I’m outa here!’ It is venomous and fatal to humans if they are untreated, and its bite is apparently painless. If you can be kept breathing (you will be paralysed by the venom) until the venom degrades in your system, you will probably survive. You can find out more about the blue-ringed octopus at http://en.wikipedia.org/wiki/Blue-ringed_octopus 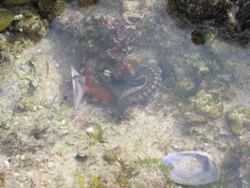 The ‘eek and leap’ survival reflex was also shown by a friend when he encountered a moray eel on one of our outings there; he also incorporated levitation into the mix. Morays look vicious but are held to be short-sighted, so come out to give you a sniff as they are good smellers. They are not considered dangerous to humans, despite being carnivores, but if provoked will give a well-deserved bite. This one was probably the green moray (Gymnothorax prasinus). Green morays aren’t necessarily green. You can find out more about them at http://australianmuseum.net.au/Green-Moray-Gymnothorax-prasinus 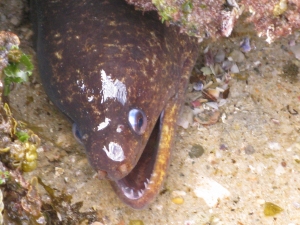 It was breeding season for molluscs, evidenced by the many rings of limpet egg masses. 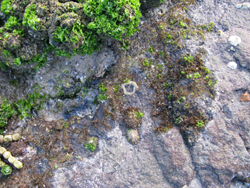 The while circle is a limpet egg mass. A limpet is below it.

On the strand, there was evidence of storms at sea – shimmering blue things washed up in the form of small bluebottles, also called Portuguese man-o-wars (Physalia utriculus), by-the-wind sailors (Velella velella) and Porpita (Porpita pacifica) and the glaucus or blue sea slug (Glaucus atlanticus).

One weird thing about bluebottles is that they are not one animal, however much they may look like it. Each one is a conglomeration of ‘zooids’, each group of these with a different function, such as a group of stingers and a group of digesting zooids. The whole lot floats around on the surface being blown by wind and drifting on currents (there are ‘left-handed’ and ‘right-handed’ ones that get turned in different directions by the wind) and catching and eating fish, and reproducing.

You can get stung walking on them or their stingers in the sand in bare feet, so watch out if they are about. The stingers are invisible in water, and can extend a long way, so even if you are swimming and see the blue body, you may not see the tentacles until too late. The sting is not usually fatal, but is apparently very painful.

You can get pictures and information on bluebottles, at http://australianmuseum.net.au/Bluebottle

Bluebottles get eaten by glaucus. You may be lucky to see the gorgeous glaucus, washed up on shore in a crumpled form. See photos of glaucus and more information at http://www.seaslugforum.net/factsheet.cfm?base=glauatla

You can allow the glaucus to unfold by putting it in an abandoned shell with seawater – it is worth it to see such a strange and wonderful creature.

So all these critters live more or less together on the surface of the deep ocean. The purple is a camouflage when they are viewed from underneath, so they blend in with the blue of the sky.

Another purple wonder often washed up is the violet snail Janthina. It also associates with this lot, floating about and feeding on the jellyfish-like animals. It secretes a set of bubbles that help it float on the surface near the bluebottles, on which it munches. Sea slugs and sea turtles also eat bluebottles. See http://en.wikipedia.org/wiki/Janthina for photos and info.